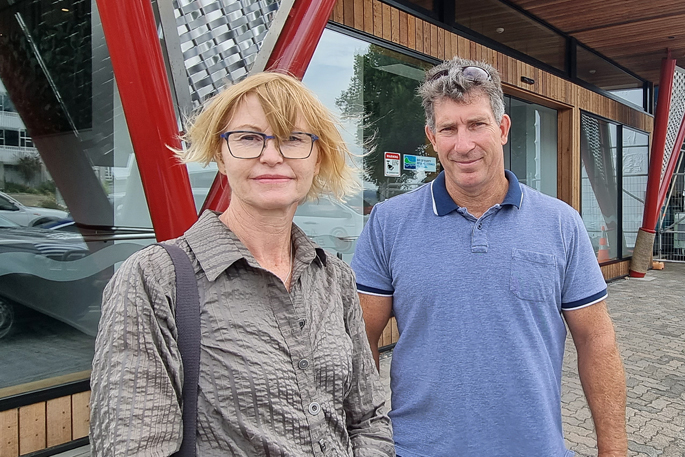 Alison Cowley and Paul Winwood are presenting their petition to the Bay of Plenty Regional Council today. Image: Alisha Evans/SunLive.

Opposition is mounting from the Te Puna community to a proposed container depot on Te Puna Station Road.

A group of locals, who have named their cause Wrong Business, Wrong Place, have formed a petition against the proposed terminal at 297 Te Puna Station Road.

They are presenting a courtesy copy of the petition, with more than 1500 signatures, to the Bay of Plenty Regional Council today.

Alison says the petition is asking district council to provide public notification of the application so the community can have their say.

“The petition is a way of saying to council, ‘this will affect us’, and making sure that council knows it is a really big deal to the community,” she says.

Alison, whose property overlooks the Te Puna Station Road site, says the community are concerned about potential increased traffic and the safety of cyclists and walkers that use the road.

“The road is already congested. A lot of people are really stressed and really worried about it.”

Resource consent for the establishment of “yard-based industrial activities” at 297 Te Puna Station Road, has been lodged by Te Puna Industrial Ltd and formally received by the Western Bay of Plenty District Council on January 18.

Te Puna Industrial Ltd was incorporated in May 2021 and ContainerCo has a 50 per cent allocation of the shares.

ContainerCo is an independent container depot with 12 branches around the country including one in Mount Maunganui.

The company provides container refurbishment, modification and storage of empty containers as well as sales and leasing.

Alison says there are concerns from nearby orchard owners about the biosecurity impact on their export crops of storing containers nearby.

“We’re passionate about the area because we live here.”

Council planning and regulatory services group manager Rachael Davie says under the Resource Management Act 1991, there is no presumption that resource consent applications must be notified.

“Instead, in order to determine whether an application should be publicly notified, a consent authority must carefully follow statutory steps in the RMA,” she says.

“Given the prescriptive nature of the statutory tests, the consent authority does not have a general discretion as to who should be notified of a resource consent application.

“It is not entitled to take into account a person’s desire to be notified, or their stated opposition to a particular proposal,” she says.

“It must instead work its way carefully through the statutory tests to determine the outcome. Failure to follow those steps carefully could result in judicial review of the consent authority’s decision by the High Court.”

The 11.97 ha property at 297 Te Puna Station Road sold for $4.7million in February 2021, according to property website OneRoof.

It is one of three properties that make up Te Puna Business Park, all zoned industrial under the Western Bay of Plenty District Plan.

Te Puna Industrial Ltd has been approached for comment

To all you people protesting and petition signing, how long have you lived in Te Puna, I dont recognize your names, where were you when development reached it peak years ago, thinking Te Puna Paradise will serve you well to feed your pockets, if it wasn’t for you greedy lot Te Puna would still be a paradise, think of all the Maori that actually live here, belong here, born in our homesteads in Te Puna, what, your view disturbed, go away, its already ruined thanks to you NIMBYs, good job, progress people, affects so called rich too, you arent rich, just greedy. Thanks for stuffing our once peaceful lives e hoa, not.

Did I miss something!

Te Puna is a FARMING area. How did this bit of land become INDUSTRIAL !!!!

........... to the Te Puna neighbourhood who have had the guts and fortitude to take on the corrupt and secret practices being performed behind closed doors. For WBOPDC to have given the ’go ahead’ - a wink and a nod, before the property was purchased gave the container company the authority to go ahead. It is proposed that up to 500 heavy vehicles will be involved daily in this new business. It is hard to imagine that these vehicles will be allowed to use SH 2, Te Puna Station Road and Te Puna Road. As if there is not one hell of a problem on those roads already. Madness if this goes ahead. Stick with it you guys - David beat Goliath - and you have one hell of a battle fighting this crowd. I hope those using SH 2 will also join the fight now

is needed because it gives comfort to interested parties. It also gives formal notice to Council that dissent is real. The people involved have the democratic right to be heard. Industry provides employment etc but those affected by it bring valid points to be considered. All the nonsense written about He Puapua is just a prime example of political scaremongering by a desperate minority. Just butt out and leave the process to play out. There are no secret deals, hence the petition, prior to the resource consent application. Good luck to all concerned.

The multi-storey container storage facility on Totara Street has obviously reached its zenith and they can’t load anymore. Melt the containers down there’s probably good quality steel in them.

Why should a petition be needed? The Council should have made the plans public and requested feedback from interested parties. But that’s not how things work in Jacinda’s brave new world. The Democratic process, which allows dissent, is being dismantled in favor of Tikanga where you do what the Chief says. Transparency is replaced by secretive deals behind closed doors, with the results presented as fait accompli. Don’t think for a minute your petition will make any difference; our only chance is to vote this Government (and its secret steal of the country through He Puapua) out of office. I’m glad more people are waking up, but it may be too little, too late. Don’t wait until YOU are affected; find out about the Tikanga/He Puapua plans NOW...