Frustration at timing of council consultation 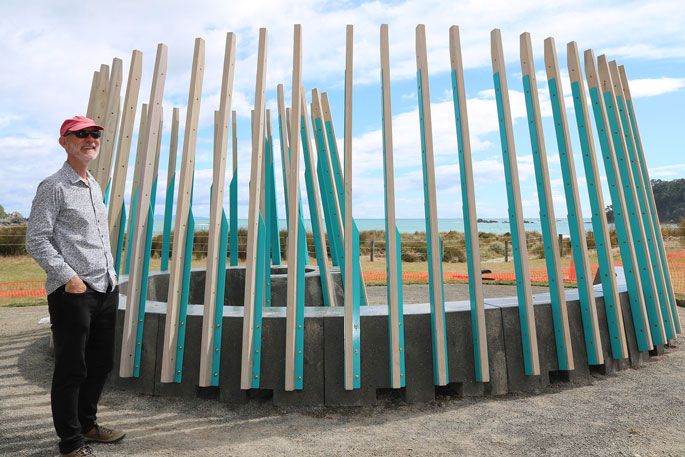 The installation placed for the duration of the consultation period in the reserve area between Pacific Avenue and Banks Avenue.

The timing of two separate events has drawn the disbelief and ire of some Tauranga residents asking how they will be able to access a Tauranga City Council community feedback session, when the nearby roads will be closed due to a multi-sport event.

The council-led Marine Parade Coastal Path Proposal open day is being held from 10am to 3pm on Saturday, between Pacific Ave and Banks Ave at Mount Maunganui.

Meanwhile, thousands of athletes are expected to take part in the iconic Mount Festival of Multisport which will mean that Marine Parade will be closed to the public – from Adams Avenue to Oceanbeach Road – from 4.30am to 5pm on Saturday.

Additionally 10,000 people are expected to arrive at the Mount for the Bay Oval’s T20 Black Clash.

As well as Marine Parade and Adams Ave being closed, The Mall in Pilot Bay will be closed from 6am Friday January 21 to 9pm Saturday January 22.

Oceanbeach Rd and Pāpāmoa Beach Rd up to Parton Rd will be closed from 4.30am to 1pm on Saturday January 22. 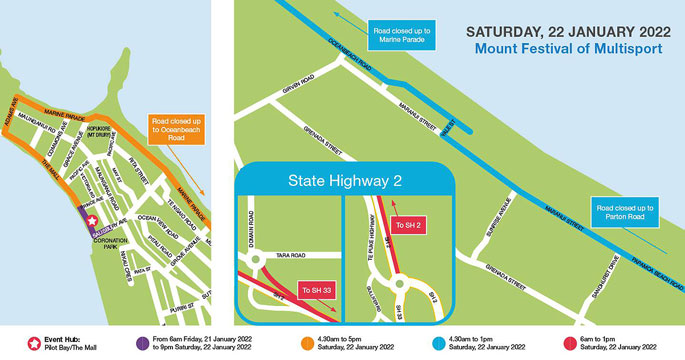 Map showing the road closures for the Mount Festival of Multisport. Image: Supplied.

The Tauranga Eastern Link eastbound lanes between Domain Rd and Paengaroa will be closed for the cycle leg of the event from 6am to 1pm on Saturday.

Motorists are advised to take the Te Puke Highway as an alternative route.

Mount Maunganui residents have expressed their frustration online at the double up in timing of the two events with some saying that it’s best just to stay home.

“Excellent Council planning again, let's hold a public viewing / consultation when the road is closed and we have many extra visitors in that area for an event. This way Council will reduce the number of people who will get to view plans and therefore less complaints,” wrote one person on the Mount Maunganui New Zealand Facebook page.

Earlier this week, Tauranga City Council posted an invitation on their Facebook page for the community to join the project team at the open day this Saturday, 22 January from 10am to 3pm at the reserve area between Pacific Avenue and Banks Avenue.

“They’ll be able to answer any questions you have about the project so you can see the how this area could possibly be utilised in the future,” reads the post.

In March 2021, the commissioners approved an investigation into the feasibility, including consenting and cost issues for an extension of the Marine Parade boardwalk from the Cenotaph to the Oceanbeach Road roundabout.

This project was then included in the 2021-31 Long-term Plan in July.

Feedback finally opened just before Christmas on December 17 and is due to close on January 31.

The feedback will be reviewed in February 2022, and the final concept design is due to be completed in March 2022. 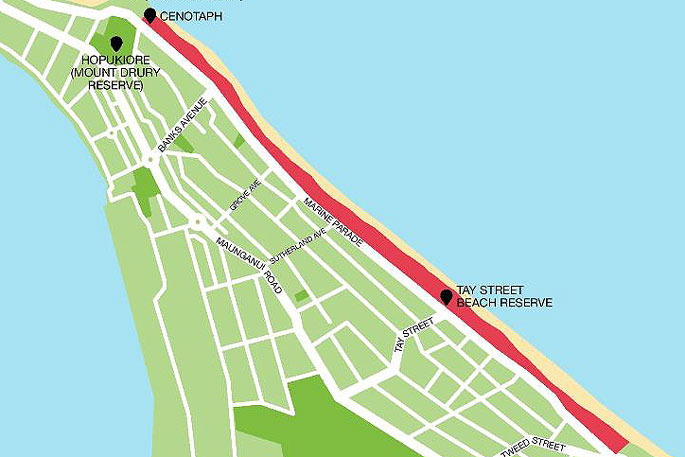 The path along Marine Parade is envisaged to be a mixture of different surfaces including timber, concrete and metal subject to its location. It may also vary in width.

“We want to include lookout areas with information on the area’s heritage and key features. We want to enhance access to the beach while also protecting the adjoining sand dunes and natural vegetation,” says a council spokesperson.

To help bring this consultation to life, council has installed an art installation which has been placed for the duration of the consultation period in the reserve area between Pacific Avenue and Banks Avenue.

“The nohonga provides seating and paints a picture of how this area could possibly be utilised in the future. As part of this installation there will be examples of paving materials considered for the proposed pathway that the public can give feedback on. An open day will be held onsite on 22 January 2022 for the public to ask the project team any questions.

“Your feedback on these ideas is key in determining the way forward.”

The public are asking how are they to provide feedback at the Marine Parade Coastal Path Proposal open day on Saturday, when the surrounding roads will be closed due to the Mount Festival of multi-sport event.

“Council is working closely with the organisers of the Mount Festival of multi-sport event,” says a Tauranga City Council spokesperson.

“The pedestrian crossing within 20 metres of where the open day is being held will continue to be open and operating during the event to service spectators as well as those accessing the beach and members of the public wanting to contribute to our discussions on the Marine Parade Coastal Path proposal.” 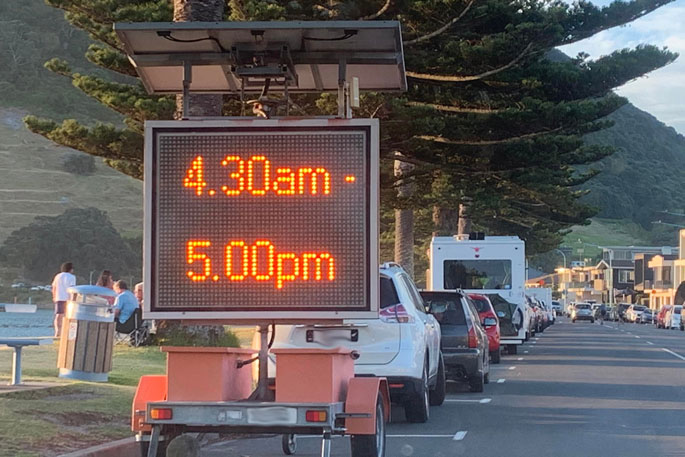 Council says the multi-sport organisers will have traffic management in place and will ensure the crossing continues to function safely.

“Council wants as wide a range of viewpoints and contributions as possible on the proposed path project and coordinating with the organisers is a great opportunity to do this.”

A suggestion was made that council could shift the consultation open day to the following day on Sunday.

Council say that there have been multiple opportunities created for the public to provide feedback on the project, in addition to the open day.

So far, only 240 responses have been received to the online survey and Council hope to have more from the Tauranga community, which has an urban population of more than 155,000 people, by the time the consultation closes on Monday, January 31.

Also occurring on Saturday, the nearby Bay Oval will host a T20 Black Clash, and the inaugural Polo in the Bay takes place at Trustpower Arena, both events expected to add to the traffic build-up around the Mount and Pāpāmoa suburbs of the city.

Significant congestion and delays of up to 30 minutes on Saturday morning are likely, particularly in Pāpāmoa around Parton and Tara roads, as cyclists link up with the Tauranga Eastern Link leg of the event on Saturday between 7.45am and 11.45am.

Tauranga City Council's venues and events manager Nelita Byrne is encouraging people to plan ahead and avoid the traffic hotspots where possible.

"To avoid the traffic delays disrupting your plans, where possible, please aim to travel outside of these times," says Nelita.

For more information and to share your feedback on the Marine Parade Coastal Path proposal, the public is encouraged to head to the Tauranga City Council website .

Consultation, what is that?

I’m only surprised that Council, sorry the Commission, hasn’t given the start date for construction of the predetermined plans for what is going to be constructed regardless of public input, as they normally do. They must be slipping.

Great smoke and mirrors tactics. One must learn that as I did many years ago that consultation NEVER means agreement. It may or may not mean you have been given information as that too can be manipulated or clouded or so much material that it’s difficult to sift through and only the erudite tenacious manage to unlock. You may also meet and discuss and feel better so good luck I guess you may make any impression

Only 240 online responses... Sounds like a resounding vote of no confidence in the public consultation process. I wonder how many responses are actually from ratepayers rather than "interested parties" or lobby groups...?

You didn’t seriously think they WANTED your feedback, did you? This is such hopeless incompetence all you can do is laugh at it.

We dont have consultation period

We have dictates from at high, any consultation is a token gesture