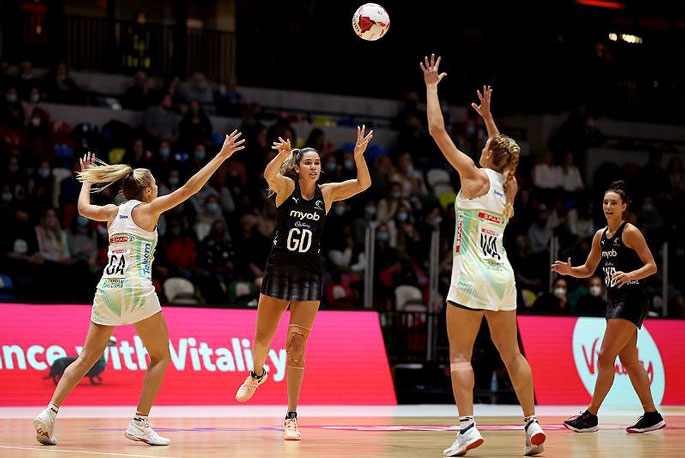 The Silver Ferns showed all their grit to seal third place at the Netball Quad Series after hanging on for a hard-fought 51-50 win over South Africa in London on Thursday.

In a repeat of the previous day’s match-up but with third place on the line, the Silver Ferns were forced to dig deep and deliver a grinding 60-minute performance in the face of a determined and spirited Proteas side.

Trailing by one heading into the final term, the Silver Ferns delivered a strong finish in what could be a defining outcome for the new-look team. Refusing to falter under intense pressure was a solid note to finish on.

With her focus primed towards the Commonwealth Games in six months, Silver Ferns coach Dame Noeline Taurua took the opportunity to run another different line-up in the last match of the series, seeking the intent from players to further press their claims.

“Both teams were under pressure but I was really pleased with not only the win, but there wasn’t the big troughs and highs that we’ve had previously,” Taurua says.

“It was a bit more even and I was happy with that performance.

“We’ve definitely got a long way to go but I know where we are as a team and individually, so this next six months will be about our domestic competition and showing growth in there.”

Maia Wilson and rising young talent Tiana Metuarau were paired under the shooting hoop, the experienced Claire Kersten got the nod at centre while Kayla Johnson and Kelly Jury provided plenty of height as the in-circle defensive duo.

Goal defence Nicola Smith earned the start for South Africa after a strong showing the previous day in the only change to the Proteas starting seven.

After giving up the first two goals, the Silver Ferns quickly found they had a tight tussle on their hands through a competitive and largely goal-for-goal first half and which set the scene for the entirety of the match.

The New Zealanders slowly found their groove on attack with Wilson’s positioning and accuracy under the hoop a feature.

With neither team gaining much benefit from gains, Kersten, who had a strong outing, picked up a couple of rare turnover opportunities to edge the Silver Ferns to a 14-13 lead at the first break.

With Sulu Fitzpatrick replacing Jury on the resumption, the Silver Ferns looked to put the squeeze on the impressive South African shooting duo of Ine Marie-Venter and Lefebre Rademan.

But they were unable to shake the persistence and patience of the gritty Proteas, who hung on with plenty of determination to match the Silver Ferns all the way.

Phoenix Karaka took over from Johnson midway through, a late rush of opportunities giving the Silver Ferns some breathing space but far from a position of safety when leading 28-25 at the main break.

Wilson with 24 from 25 and Venter 18 from 18, the respective goal shoots delivered impressive returns for the first half.

Relentless with their approach and ability to retain possession, the Proteas turned the game on its head through an increasingly physical third stanza.

In a sour stalemate, South Africa broke the deadlock to level twice before edging to the front as they matched the Silver Ferns every step of the way.

With momentum on their side, a buzzer-beating goal from standout shooter Venter delivered the South Africans a 39-38 lead at the last turn, leaving the Silver Ferns with plenty to contemplate on the run home.