Increase in bites and rashes as weather heats up 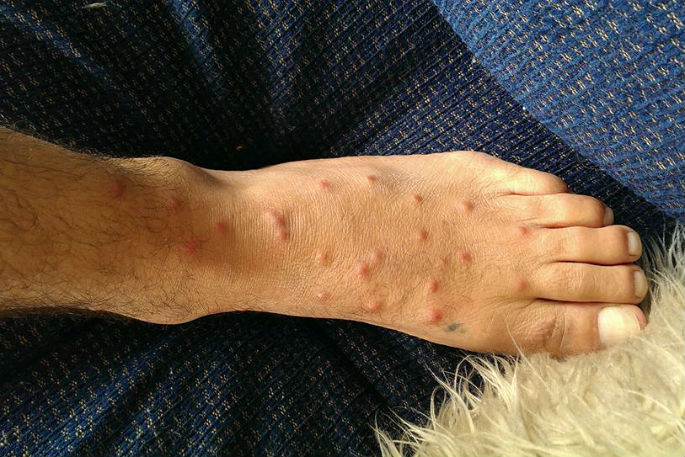 An example of someone who has been bitten while on the beach.

Warmer sea temperatures and a changing climate could be what is causing more ocean-borne bites, stings and rashes, a marine scientist says.

Ocean swimmers across the North Island have been sharing their itchy experiences on social media.

Stings and bites can be caused by a few sea creatures, but the biggest culprits are sea lice and jellyfish.

When Papamoa mum of three Ashley Cosford packed up the car and took the kids to the Motiti reserve beach last week, she was met some painful company.

"That night when we got home the kids were just absolutely riddled with bites."

She rushed to the pharmacy to try and get anything that would soothe the itchy bumps that had formed on her children's skin, but they were sold out.

The pharmacist told her it was either caused by jellyfish or sea lice.

"The kids are just aggravated, they were so itchy, my daughter, the poor thing, it was all over her bum, the worst, and my son, he even had some bites that were blistered."

They eventually found an antihistamine cream but nearly a week later, her six-year-old daughter still has the red bumps.

"New Zealand is having a pretty unusual summer with much warmer temperatures than normal, probably due to climate change effects, so we've seen some quite remarkable changes and different organisms that are turning up on the coastline."

He says there are a few different sea creatures to look out for when swimming.

"Jellyfish, in particular, are real opportunists and there are things called sea lice, which are like little arthropods or insects of the sea.

"You can get bitten by those, and they produce a nasty bite as well. They're cold-blooded, so when the water is warmer, they are more active, so there's lots of reports of people being bitten by different things."

The rash can last up to two weeks and can be treated with calamine lotion, antihistamines and mild steroid creams.

Beachgoers can check for jellyfish and sea lice sightings online on Safeswim, which also provides live information on water quality and swimming conditions.