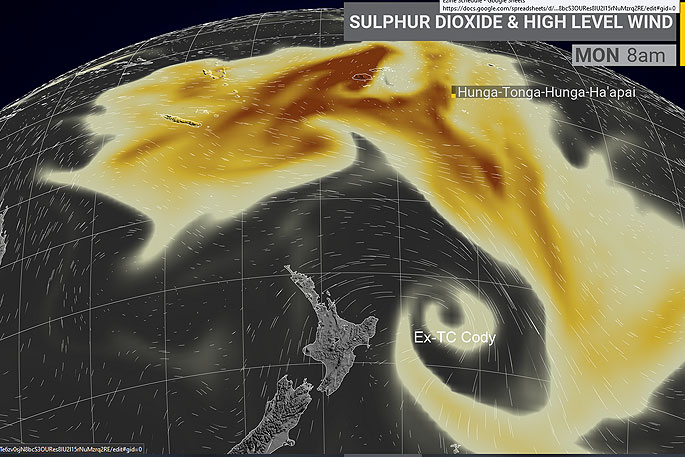 A satellite image showing the ash cloud from the volcanic eruption. Image: NIWA.

The Hunga-Tonga-Hunga-Ha'apai volcanic eruption is unlikely to have a significant cooling effect on temperatures globally, say NIWA scientists.

When a volcano erupts, it releases huge amounts of sulphur dioxide (SO2) into the air. High concentrations of SO2 are currently over the Pacific.

This is happening in the troposphere, the lowest part of the atmosphere, says a NIWA spokesperson.

"However, global climate will be impacted by how much SO2 reaches the stratosphere, which is higher up than the troposphere.

"There, SO2 is converted to sulphuric acid droplets over a few weeks. These aerosols can have a long-lasting radiative effect around the globe, reflecting incoming sunlight and lowering temperatures.

"About 30 years ago, the Mount Pinatubo eruption in the Philippines pumped 15m tonnes SO2 into the atmosphere and cooled the earth by one degree for the next year and a half.

"However, early indications from the Tonga eruption do not show extreme levels of SO2 in the stratosphere."

NIWA says more measurements need to be taken and further eruptions are possible, but is seems that this eruption event is unlikely to have a significant impact on global climate or change the direction of the global temperature trend.

"However, some of the SO2 has been wrapped into Cyclone Cody, east of New Zealand.

"SO2 is a toxic, invisible pollutant, so for those in Tonga, this could cause short-term hazards to human health, including acid rain and 'volcanic smog'."

so all we need now is for a few mountains to blow their top and we wont have to worry about climate change. isnt nature wonderful