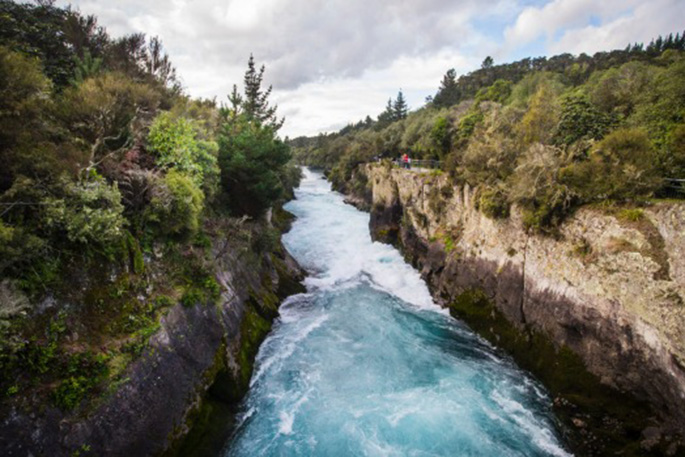 One wrong turn on your float device and you could find yourself hurtling down the Huka Falls, Waikato River users have been warned. Image: Fairfax NZ.

As the mercury rises hundreds of people have been tempted to take a float down the Waikato River from Taupō, but authorities are worried a simple mistake could send them straight over one of the country's biggest waterfalls, with potentially fatal consequences

Mayor David Trewavas has issued a warning in the wake of 15 drowning deaths across New Zealand since January, as more and more people take to the Waikato River, floating from the lagoon area below Control Gates Bridge, past Cherry Island and Spa Park to Hipapatua Reserve (Reid’s Farm).

Trewavas says while it’s great to see people out enjoying themselves on the river, the trip can be more hazardous than people expect.

“A float trip can be great fun but do check ahead so you know where the exits are, always wear a lifejacket and don’t combine drinking and floating,” he says.

Warnings have also been issued by acting Lake Taupō harbourmaster Jamie Grant about the number of people attempting the river float on blow-ups such as air beds without wearing a lifejacket.

Alcohol consumption while people are floating is also a safety risk.

At the end of the float, some people are simply abandoning their flotation device and walking away, leaving it for others to clean up, says Grant.

In the past kayakers and rafters would do the river float, but the activity has grown more popular in recent years with the advent of cheap blow-up flotation devices.

Fresh water is not as buoyant as sea water and the river has unpredictable currents that can catch even strong swimmers unawares. The river can change fro season and the volume of flow can also change very quickly.

In several places there are also snags just below the surface and overhanging trees that can puncture a blow-up flotation device.

Floaters must also stay well clear from the water below Taupō Bungy. If people miss the exits at Ōtumuheke (Spa Park) or Hipapatua, there are only a few places to get off the river before the current will drag floaters over Huka Falls. Ensure you look for the signs that point to where to get out.

Tūwharetoa Māori Trust Board natural resources manager Peter Shepherd is concerned about the amount of rubbish being deposited in the river by people on float trips.

“We want our whānau and manuhiri to enjoy our awa and a healthy level of respect should be given to the river when doing so.

“Our visitors can easily help preserve and protect this precious taonga by firstly taking steps to not pollute it or the surrounding areas.”

Water Safety New Zealand says the biggest issue with river safety is that people underestimate the risk or believe there is no risk at all; and also overestimate their ability.

Advice for people attempting the Waikato River float is to make sure they know where they are going and where the exit points are, have a safe well-maintained flotation device and some way of steering it, wear well-fitting lifejackets, keep an eye out for each other and save the drinks for when they are safely off the river.