More than 40 years in a great job 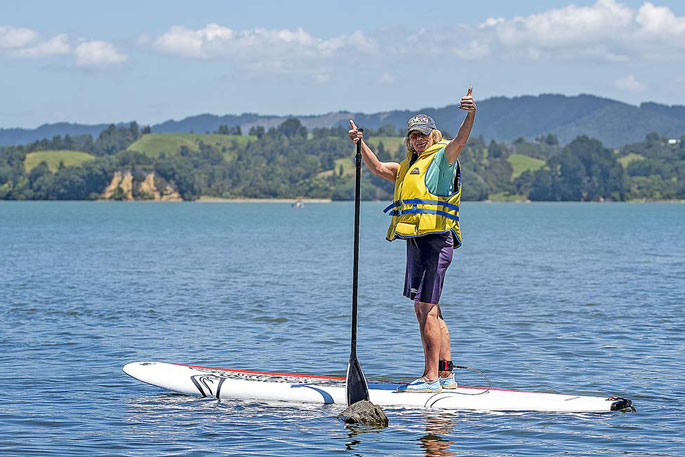 One of Whakatane District Council administrators Janie Storey’s promises to herself on her retirement is to remember with fondness all the people she has had contact with over the past 44 years.

Having started at Murupara Borough Council as a teenager, straight out of the town’s Rangitahi College, she has been with the council through its amalgamation with Whakatāne, seen 10 chief executives come and go, 12 mayors, 82 councillors and says she has “lost count of how many community board members”.

Her official leaving day was on Thursday last week, a 65th birthday present to herself after her many years of administering to countless council meetings, committees and events.

Her most recent roles have been governance support advisor and deputy electoral officer.

The town clerk was the former title for what is now called the chief executive so it was no small responsibility.

She held that position until she left to have children but was back again four years later. When the borough council amalgamated with Whakatāne District Council in 1989 she ran the Murupara service centre for many years before moving to the Whakatāne office 25 years ago.

Highlights of the job have included being in charge of Anzac Day civic ceremonies, the Over 80s Morning Tea which have been held since 1999, citizenship ceremonies and Young Achievers Awards, and elections.

“I’ve been the key deputy electoral councillor at the council for the past few elections.”

She says there's only one local government election she has not been involved with since 1974 and that was when she left to have her children.

“It was a great job. I’ve been doing all those things for 25 years.”

Other highlights have been her involvement with the Sister Cities partnership with Kamagaya. She said she enjoyed three trips to Japan as part of the partnership, in 2000, 2003 and again at the 20th anniversary of the friendship in 2017.

She has also enjoyed administrating the community boards, and the committees that allocated grants such as the Whakatāne District Council Annual Grants Scheme, sporting grants, Creative Communities and Community Board grants.

“That was always interesting, because we made it so that the people who wanted money would come and talk to the board in person, so it made it real for them. It wasn’t just some anonymous person. It was a really good way for the community boards to meet people in their communities.

“Creative Communities was the same, they introduced a thing where the applicant has a choice to talk to the committee before it decides. It just makes so much difference to both parties. Some people can fill out a form and some can’t, but it doesn’t mean to say that the needs of the person who can’t fill it out isn’t greater than the person who can. That was one of the real enjoyment parts of the job.”

Janie was also closely involved with the distribution of the community fund in the wake of the flooding in July 2004.

“Because people gave the council lots of money and the Government said they would double what we got ... we ended up with over $4 million. I was the secretary in charge of putting everything together for the allocation.”

An advisory panel was put together to guide the trustees in allocating funding, which included iwi members from each area, the Red Cross and people working alongside affected people in the community.

“At least one if not two or three people on that panel would have worked alongside and knew these people’s situations because they were on the ground working with them. So that was a really amazing thing to do. I put a programme together of how that worked. We did that with Matata and Edgecumbe as well. So that’s really humbling to be able to help these people in some small way.”

Working closely with mayors and councillors had its own challenges and rewards.

“You get to work quite closely with the elected members and you get to respect them.”

However, she says she has to train herself not to form any opinions on anything.

“I learned to not really form opinions on anything because it didn’t really matter what I thought. The council made the decision and you have to go with that decision. That’s your job. Therefore, I trained myself to not have any particular opinion on all of the bigger questions of council. There’s been some times when I’ve just had to physically force herself to not say something.

“With elections, I didn’t tell anyone how I voted, including my family. Because I never wanted people to say, ‘Oh, Janie’s voting for this person’.”

This didn’t stop her from occasionally giving overly long council meetings a “bit of a poke”.

I’ve got kind of a warped sense of humour. We’d be at a meeting and all of a sudden I would start sighing if I’d had enough of people talking around in a circle to come to a decision. I would poke the chairperson and say, ‘I’ve already got it written down’ and I’d just pop down what the conclusion of what the decision would be.

“One of the things we never ever did was say, “Oh it will be a short meeting”. If you said it out loud, low and behold, you’d still be going two or three hours later, what should have been done in half an hour.”

Citizenship ceremonies provided Mrs Storey with some of her more hilarious blooper moments. “One was when we introduced the mayor, when we brought them into the council chamber for the citizenship ceremony. This time it was Colin Holmes, and I said ‘please rise for his worship the mayor Colin Hammond.

“At another citizenship ceremony, I used to say the opening speech, but we did a prayer first. I brought them in and then I started on my speech and when I’d finished, Colin Holmes goes, ‘Well that’s very nice, but now we’ll have the opening prayer shall we.’ It was one of those moments when you just think, ‘s**t’.

While she got on well with all the mayors she has worked with, her strongest friendships were with some of the mayoresses. Colin Hammond’s wife, Karla, and Cheri Niederer, Colin Holmes’ partner were very good friends, and there are a couple of the female councillors that I still have lunch with a couple of times a year.

Janie says she doesn’t have any immediate plans for her retirement. With four grandchildren and living opposite Ōhiwa Harbour, there's always plenty to keep busy with.

She has been a Justice of the Peace for about six years and is also a marriage celebrant and would like to become more involved with this in the future, helping people through crucial moments in their lives, such as weddings and funerals.

“Just helping them, including them in the ceremony and making the ceremony about the person. That’s something I’d like to do. Coming from that small town background and a big farming family, it’s just something that comes naturally. You just relate to people.”

Mostly, she is content to get through the summer, occasionally reflecting on all those who she has shared the past 44 years with.

"Those that have helped shape me, laughed with me, cried with me, taught me to be patient and just enjoyed my company and warped sense of humour.