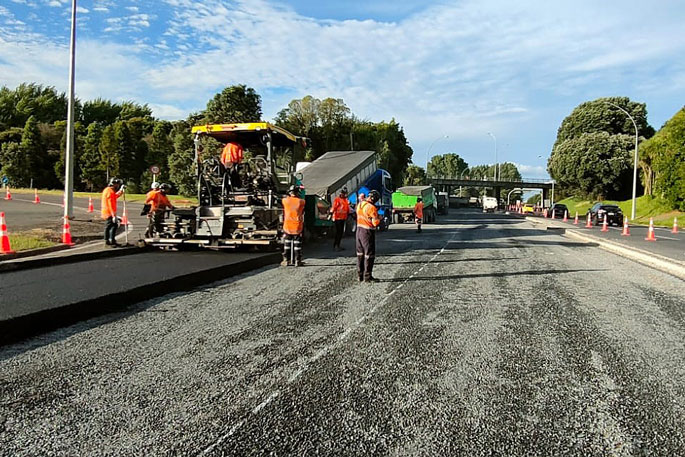 Major road working projects are continuing around the Bay of Plenty this week.

Waka Kotahi NZ Transport Agency and its contractors are completing an ambitious programme to improve safety and resilience of the network and whilst delays are expected, many considerations have to be made for how to complete these important works.

“Waka Kotahi monitors the weather forecast closely, and sites and timings will change at short notice. We are making the most of the summer weather and before schools go back,” says Roger Brady, Bay of Plenty system maintenance and operations manager.

“Our key focus is to keep people using the roads and our contractor crews safe. While this can mean there are last minute changes to our maintenance programmes, we provide as up-to-date information as we can.

“There will be other work sites across the network not mentioned below, although we are keen to provide advance notice of some of the more disruptive works.

“For next week, MetService is forecasting Cyclone Cody to approach the country on Sunday and affect a large portion of the northern and eastern North Island and the upper South Island,” says Mr Brady.

Waka Kotahi encourages people to check the weather forecast before travelling this weekend, with Cyclone Cody expected to hit New Zealand in the coming days.

From Monday 17 January there will also be 14 chipseal sites in the Waioeka Gorge between Waiata Road and the Gisborne/BOP boundary.

For 24 hours following completion of chipseal sites, a 50km/h temporary speed limit will be in place until the road is swept and line marking reinstated.

Some of the above works are weather dependent and may be postponed in the case of poor weather. For up-to-date information on road works, traffic, detours and delays, motorists are encouraged to visit the Waka Kotahi Journey Planner website (journeys.nzta.govt.nz).

Waka Kotahi thanks motorists for their patience while we complete this essential work to keep the state highways safe and resilient.

I have a life, thanks. I was not attacking you and we were talking ONLY about road works. It would seem that working 24/7 could be advantageous. I don’t disagree with the rest of your arguments; you over-reacted.

You need a life man. I just showed you one facet of work that gets carried out during summer. There are thousand other works associated with it such as stormwater improvement, geotech investigation, survey, NPV evaluation, Traffic engineering and many more. Now most of them have to be carried out during daytime and in summer. For example: Survey work can’t be carried out during daytime due to obvious reason. Stormwater work can’t be carried out at night and rainy season. So the "Math" you have done just includes one part of works not all. You do what do best and let us do what we do best. I don’t go to barista to tell him how to make a coffee. It’s very easy to criticize sitting behind a computer. Join the system and help us to make better.

I just reviewed this discussion and I think a point has been missed. You argue that if work proceeded 24/7 the cost would be greater and would incur more tax. Consider this: work costs $x a day. A certain job takes 20 days. It costs $20x. Working nights costs $1.5x, so the same job done 24/7, costs $25x. We paid $5x more, as you noted. BUT, the roads were only closed for 10 days. So we GAINED 10 days of full traffic. That means commerce, generating revenue on which it pays tax. I believe the tax generated is far more than the $5x we "lost". What would petrol tax alone, on 10 days of full traffic flow be worth? Apart from the general convenience, keeping roads open generates revenue. Yadick and Caveman are 100% right; we should be minimizing closed time and working 24/7.

Yes, they are facts as I work in the industry. The reason they do all the once is because Tauranga Pavement is sitting on volcanic ash which has a very low life which triggers frequent repairing. Due to the exponential growth in port traffic and population in the last 10 years nobody predicted that 40 years ago. So although it looks they are not spread out but trust me they are. How to fix weak pavement: Dig up the whole pavement and replace with 220 mm asphalt- rate - $300 sq m - More tax please. Now the answer to your question and a general view point of people: Why don’t they do at night time: It is expansive as workers are charged at premium rates by TM companies. Again which triggers more tax.

Your information and explanation was going well until near the end. Our comment was why can’t they work night crews as well and do they really need to block every route of travel all at once. Why not stagger the works. That aside, your facts, if they are, are interesting. Thank you. (By the way, neither of us commented on the time of year . . .) So keep calm and enjoy the sunshine.

Answer to Yadick and Caveman

Asphalt doesn’t stick to basecourse during winter. If laid in winter if will be required fix up every 6 months. Each fix cost almost 12-25k. The asphalt costs around 50-70 per square meter. If they do all year around, it will increase expenses so as our taxes. So have a research before you speak or blame people for the work they have been doing for years. The asphalt they do on State Highway is built to stay for at least 12 years. Now keep quiet and be calm

The works have to be done during christmas time. Firstly, less traffic on the road and secondly, asphalt doesn’t stick to the basecourse during winter. If they lay asphalt or chipseal during winter season it will get ripped off within a year.

Is there a need to do all these roads at once and gridlock Tauranga? It appears to be a little game they like playing and as Caveman rightfully points out, why can’t NZ do the works 24/7 - get it done and get out.

Are these road works being done on a 24/7 basis or is it 8am to 5pm with the equipment idle for 16 hours a day?? (Oh and the real work does not start until 9am and finishes at 3.30/4pm) Go to ANY country in the world and this sort of work is a 24/7 operation until completed ! ! ! Oh, sorry in New Zealand the contactors don’t employ enough staff to do 24/7 and don’t want to - spin the job out - COST the ratepayers / taxpayers more and the profit is BIGGER !!!

Why do these roadworks always get done over Christmas and at this time of the year? Surely it could be planned better