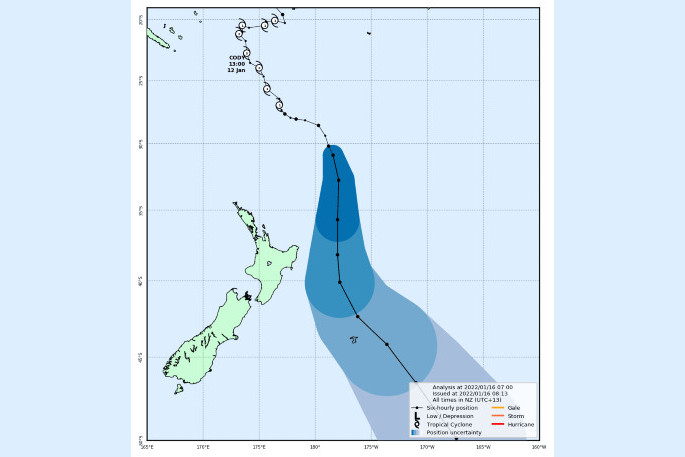 Cyclone Cody looks to be tracking to the east of New Zealand. Image: MetService.

MetService meteorologists advise that the risk of heavy rain has diminished as Cyclone Cody looks to track east of New Zealand. However, the risk of severe gales about exposed parts of eastern Bay of Plenty and Gisborne remain.

Cyclone Cody, currently over waters to the northeast of New Zealand, is expected to move southwards and pass far to the east of East Cape during Monday, before moving further southwards towards the Chatham Islands on Tuesday.

“Wave buoys have already recorded large waves for northeastern coasts. These are separate to the Tsunami wave from the Hunga Tonga - Hunga Ha’apai volcano which has affected parts of New Zealand. We are advising people to be on alert for high waves over the coming days.”

Northland to Bay of Plenty continue to have large waves until Monday, while the greatest risk of unusually large waves from Gisborne down to Wairarapa is from Sunday until Tuesday. Chatham Islands can expect the swell to reach them on Monday.

“Waves of this size and direction mean that they will be seen in places that rarely see large waves and are usually considered safe for swimming, so please take care,” says Lisa.

Many regions in New Zealand, especially in the west and south will have plenty of sunshine today and as we head into next week.

With Cody moving east and the risk to New Zealand easing, the National Forecasting Centre has its attention on Tonga.

“MetService is the Volcanic Ash Advisory Centre for the Hunga Tonga - Hunga Ha’apai volcano, so our aviation team has been busy issuing volcanic ash advisories and warnings to ensure no planes fly through the cloud of ash,” says Lisa.

“We are also providing forecasts to the Ministry of Foreign Affairs and Trade in support of the relief effort. “