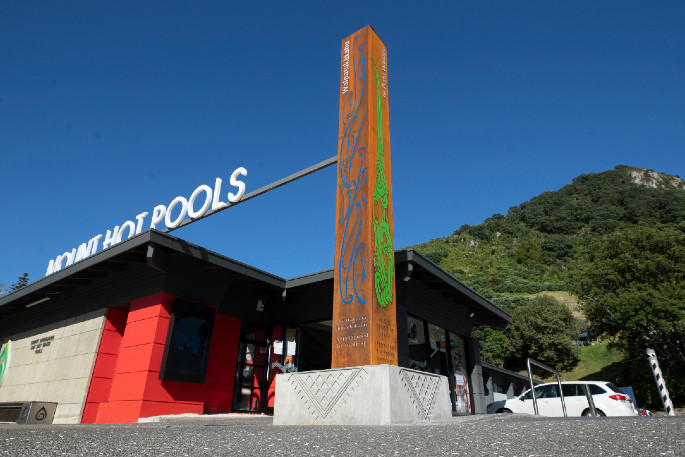 The Mount Hot Pools has unveiled a culturally significant artwork that now stands outside their iconic site at the base of Mauao.

The work, titled He Pou Rarama by artist Tiare Dickson, tells the story of the four sacred springs of Mauao. Tiare has chosen this story to signify the connection the Mount Hot Pools has to these four traditional springs.

Te Puna Waitapu, one of the four springs, is the original hot pool used in ancient times for bathing and healing.

Waipatukākahu, on the western side of Mauao, was a spring used for washing, while Ruarapapari was a cool water spring for drinking and bathing. The most sacred spring of all, Te Kawa Waipuna, led into two pools: one for birthing children and one for bathing the deceased.

The Mount Hot Pools are the only known ocean water hot pools in the world. The pool development goes back to the 1950s, when the Mount required more fresh water for an increasing population. What was found instead was hot salt water. The hot pools officially opened in January 1966 and were extended in 1975. The pools we know today were created in the early 2000s.

The tale of the springs is also widely relevant.

“It is meaningful to all iwi and hapu and cultures who have a connection to Mauao, so everyone will feel involved in this work” says Tiare.

"We hope that He Pou Rarama becomes an icon and adds to the story and learning for people visiting the hot pools and those walking up and around Mauao,” says Ngāi Tūkairangi Hapu Trust chairperson Anaru Timutimu.

The pou is crafted from corten steel, rather than the more traditional wood medium which would erode in the corrosive salt air at the foot of Mauao. The more contemporary material will purposefully rust over time to fit in with the natural landscape.

The design work of the pou has been laser cut to reveal coloured acrylic which glows with the assistance of LED lighting, providing a different vista by night.

The four springs are represented on each side of the pou by a different colour. Waipatukākahu is a deep blue, Te Puna Waitapu - the original healing hot pool - is a light green, Te Kawa Waipuna is red and Ruarapapari is light blue/aqua.

Alongside the pou, the Mount Hot Pool has erected palisade fencing with seating for community use - the final touches to their external façade upgrade.

Nearly 300,000 visitors frequent the Mount Hot Pools each year. In August last year, the venue was awarded the Tripadvisor Traveller’s Choice Award, ranking the iconic facility in the top 10 per cent of attractions worldwide for ten years running.

“He Pou Rarama is such a great external rejuvenation for our world class facility,” says Mount Hot Pools manager, Matthew Strange. “Now the outside of our facility matches the internal sanctuary. It also reflects the significance of this land to our local people.”

I like this. It’s subtle and doesn’t scream in your face. A great place for it too. My only concern is the amount of clothes that will ruined as tourists pose against it for photo opportunities and get rust all over their clothes.