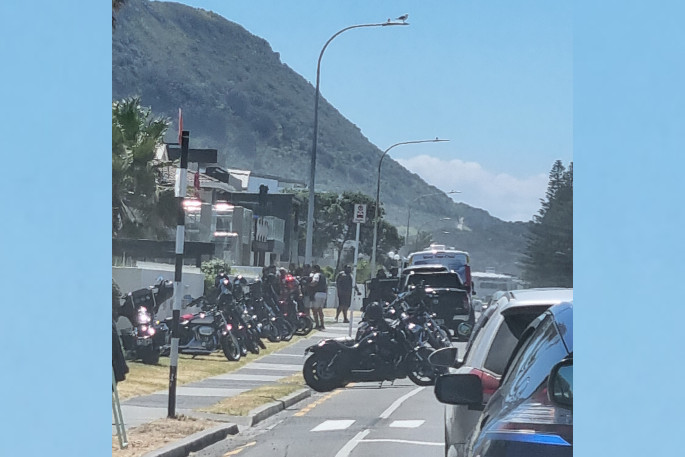 Over 100 gang members with motorcycles have congregated on Marine Parade. Photo: Supplied.

A heavy gang presence has been observed at Mount Maunganui on Saturday afternoon.

A SunLive reader reports that there are over 100 gang members with motorcycles along Marine Parade.

"Probably in excess of 100 members of the Head Hunters opposite Banks Ave,' says a SunLive reader.

"Rival gangs are riding past and intimidating each other.

"There is a heavy Police presence there as well."

"Police are aware of a large group of motorcyclists on Marine Parade, Mount Maunganui this afternoon," says a Police spokesperson.

"Police are monitoring and if people have concern for their own or other's safety they're encouraged to call Police on 111."

Motorcycles are revving up loudly along Marine Parade.

I can’t believe some of these comments. I’m a local & was not far from them & what I seen was just a group of bikers enjoying the beautiful weather & having a BBQ along with friends & their families. They didn’t come across as intimidating at all & I know my kids loved looking at the bikes all parked up. They pay taxes like everyone else & have every right to the access to our amenities. People need to stop being so judgemental & mind their own business. Not all gang members are bad & it’s because of bigotry that cause people to judge without knowing. With all that we have being through with Covid & lockdowns stop with all the hating

I like the idea of bring in the Army and round these imbeciles up. Caveman makes a good point too. Not just yellow lines but for safety of pedestrian crossing.

I see from the photo

That they are parked on dotted yellow lines - WHERE are the Police !!

Rival gangs intimidating each other.. and the police are the biggest gang of them all.

totally agree with yaddich. bring in the army and give them special powers to round up all these imbeciles and confiscate their bikes.

Passed my Wife and I on the expressway. We had to stop conversation as we couldn’t even hear each other over the bikes. How small their ..... must be. Why NZ Police are these bikes allowed on the road? If that was my car it would be pink stickered and I would be fined. Why the hell are these morons getting away with all this? Rival gangs intimidating each other . . . So for sure that would be enough to intimidate normal people and therefore grounds for Police action. I hope registrations were noted and will be actioned. Perhaps Sunlive could do a follow-up article?