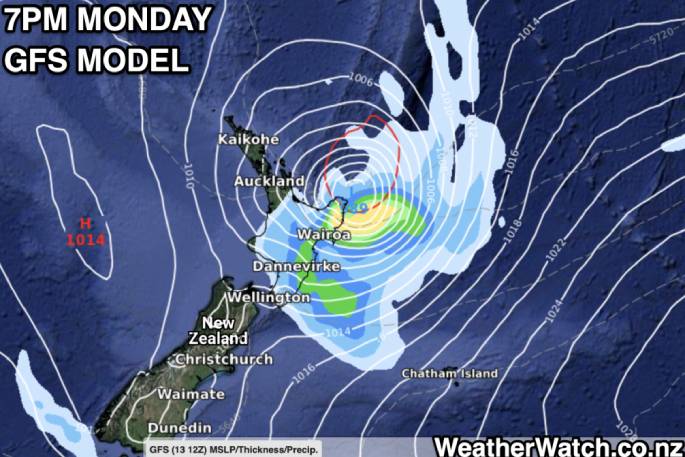 UPDATE: MetService has now issued a severe weather warning for the former Cyclone Cody this Monday.

Cyclone Cody, currently over waters to the north of New Zealand, is expected to move southwards and pass near East Cape during Monday, before moving southeastwards towards the Chatham Islands on Tuesday.

This cyclone will be accompanied by a tropical airmass which may bring heavy rain to the northeast of the North Island on Monday, along with gale force south to southeast winds.

Expert Meteorologists at MetService are closely monitoring Cyclone Cody, and people are advised to stay up to date with forecasts and Severe Weather

Area: Gisborne and the Wairoa District

Area: Bay of Plenty east of Whakatane and Gisborne north of Tokomaru Bay

EARLIER: WeatherWatch computer modelling and IBM data suggests the remnants of Cyclone Cody will slide past or over the Eastern Bay of Plenty as well as East Cape, Gisborne on Monday.

The precise track is still to be locked in. It could take until Sunday for a more confident prediction of the former Cyclone’s North Island inundation but flooding and power outages are still potential risks in the Eastern Bay region and beyond.

Forecasters are still working out the margin of error around the sides, which could impact the Coromandel and Auckland but current data is becoming more consistent with the northeastern side of the North Island being most exposed to a direct hit from Cody - or a very near offshore brush.

The further the centre is away from land, the less likely wind damage will be a concern - but rain may still be heavy enough to cause flooding. Peak estimates for the Gisborne Ranges are as high as 200mm at this stage.

There are continued warnings of dangerous waves and coastal rips and currents along the eastern side of the North Island with wave heights well above normal for many popular coastal holiday spots.

Even when swimming in relatively shallow water, swimmers can quickly find themselves out of their depth when these large cyclone swells hit the beach, says Allan.

"Such waves are not consistent, and this unpredictable pattern often catches out beachgoers, because the large dangerous waves are spaced well apart.

"The best advice is take note where the wet sand is, that’s how far the big waves will travel up the beach - so stay out of that zone."

Winds are still forecast to be damaging in a large portion of the northeastern North Island as Cody passes by.

A WeatherWatch statement says that, due to the uncertainty around the precise tracking the centre of Cody will make, it's harder to lock in severe risks further afield just yet.

With New Zealand being shaped north to south and Cody tracking the same trajectory any “wiggle" or zig-zag west or east may have a significant consequence to local forecasts, especially for regions further to the west and on the margins of severe weather.

MetService is expected to start issuing watches and warnings either later today or over Saturday and Sunday.

Local lifeguards are asking the public to respect the swell and the dangerous conditions and be wary and watchful on the East Coast, over the coming weekend and following week.

If people choose to swim on the East Coast, they should only do so at a lifeguarded beach and seek out the lifeguards on patrol for their advice on the conditions. They should also follow this advice:

· Only swim between the red & yellow flags

· Do not swim alone

· Do not take any undue risks.

Be aware the lifeguards may choose not to put the red and yellow flags up and fly ‘Red Danger - No Swimming’ flags instead.

These flags warn the public the beach is not safe to swim at during this period. Please respect their decision and find somewhere safer to swim, such as a public swimming pool.