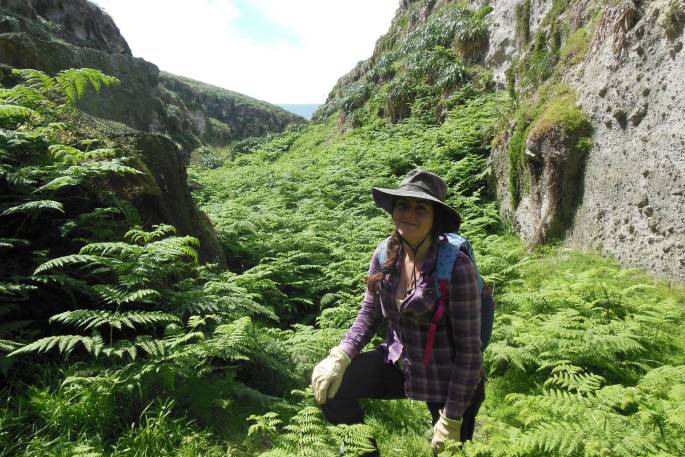 University of Canterbury Research Fellow Dr Vanesa De Pietri is leading a new study that will use fossils to shed light on the evolution of modern birds. Supplied photo.

Canterbury researchers are on the hunt for rare, ancient fossils from the Waipara River area that could shed new light on the evolution of modern birds.

University of Canterbury Research Fellow Dr Vanesa De Pietri is leading a new study that will use fossils to shed light on the evolution of modern birds.

The Upper Waipara River in North Canterbury is of critical importance to the project, because the research team believes its sediments, which were once part of the seabed, hold some of the world’s best-preserved and most significant marine bird fossils from the Paleocene epoch (about 66 to 56 million years ago).

Dr De Pietri hopes to unearth fossils that will boost global understanding of the evolutionary processes that drove the diversification of modern birds following a mass extinction event about 66 million years ago. The extinction of archaic birds, triggered by an asteroid impact, led to the development of the modern birds we see today, she says.

“Fossils dating from this critical timeframe found elsewhere in the world are quite rare and often fragmentary,” says Dr De Pietri.

“What’s unique about the Waipara River fossil specimens is that they are often well-preserved and reasonably complete, so we have this opportunity to develop a comprehensive record of early marine birds that spans several million years following the extinction event. There is potential to discover some of the earliest representatives of certain seabird lineages.”

The oldest penguin fossil in the world – Mannering’s Penguin, dating back some 62 million years - was found in the Waipara Greensand in 1996. The species is named after its finder, Al Mannering, an experienced fossil hunter.

He is a member of the new research project, as is fellow fossil collector Leigh Love, who has made many important finds in the Waipara area and will be leading the project’s fieldwork component.

Along with existing fossils, the team will collect and study new specimens and look at how they compare with other relevant extinct and living species to build an understanding of how modern birds evolved. Microfossils found in sediments with the specimens will also be used for dating and to build a picture of ancient climate, marine and land environments.

“We’re very thankful to the Marsden Fund for supporting our research which will offer new insights into the early evolutionary history of seabird lineages,” says Dr De Pietri.

“What we are going to learn will be fundamental to developing a general global understanding of how modern birds evolved.”

She says every specimen found tells an interesting story and the research team is confident that more fossils of previously unknown penguin species will be uncovered.

“Penguins seem to be the most common bird group in the fauna.”

The team has already uncovered several fossil specimens that are not penguins, including a well-preserved skull and partial skeleton of a tropicbird – a type of seabird – which could represent a new species.

Newly recovered specimens found during the project will be studied in the laboratory at the University of Canterbury before being offered to Canterbury Museum for their collection.