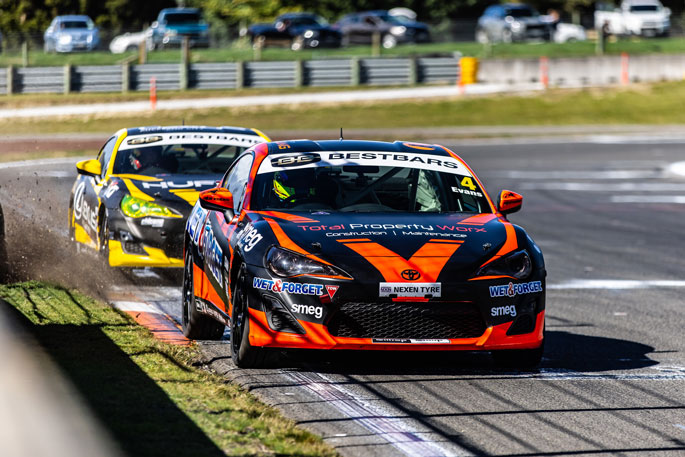 It’s been a tough build up to the start of what will be the biggest ever Toyota 86 Championship, but there’s no doubt the long wait before the season finally gets underway will be worth it.

A total of twenty two cars should take the start at Highlands on January 14-16 and at stake this season is the biggest ever prize package for a domestic New Zealand motorsport championship.

A much sought after test with V8 Supercar icons Tripe Eight Engineering tops the $175,000 prize pool and the drivers are set to fight tooth and nail.

Testing before Christmas simply proved the championship is going to be closer than ever, with just over a second and a half covering the first 16 drivers.

Heading the pack impressively was Hugo Allan who was quickly up to speed in his Heart of Racing entry.

Hugo debuted at Taupo last season and showed plenty of promise, so will head to Highlands hopeful of a strong showing.

At this early stage it’s hard to look past the top two finishers in last year’s championship, who are both back for another season of Toyota 86 racing. Champion Rowan Shepherd lines up in the Speed Works entry while Simon Evans returns in his Wet & Forget car.

Shepherd was tenth fastest in testing as he got to grips with the different Toyota 86 but Evans’ form is unknown as he and Marco Giltrap elected to miss the Hampton Downs test and head to the South Island.

Evans was a consistent points scorer last year and arguably the racer with the best ability to come through the field. In this calibre of field, over the course of a season, that ability may well come to be a very powerful ally for the popular and very experienced Evans.

Giltrap too can be expected to shine, having overcome injury and in his first test back in the car at Hampton Downs, finding a few tenths to lower his personal best.

Watch out too for Brock Gilchrist and Ronan Murphy. Gilchrist bagged his first race win at Taupo and it could be the key to unlocking a very serious championship challenge.

Brock knows the circuits and sweet spot of the Toyota 86 as much as anyone and is almost certain to figure strongly.

Murphy enters his second season with a podium finish at Manfeild the highlight of his first year. There’s no question Ronan has the pace, and with a bit of luck and a good run of results, he too could be in the frame as the season progresses.

These experienced racers will this season be joined by a long list of additional up and coming talent.

John Penny, Mark Mallard, Todd Foster and Christina Orr-West fly the flag for the more experienced racers in the championship, while Todd Prujean, William Morton, Dion Pitt, and Sam Cotterill will all be eyeing up rookie honours.

Picking a winner? Impossible. But with perhaps 20 of the drivers likely to be covered by the smallest of margins on outright pace, the championship is all set to be a classic.