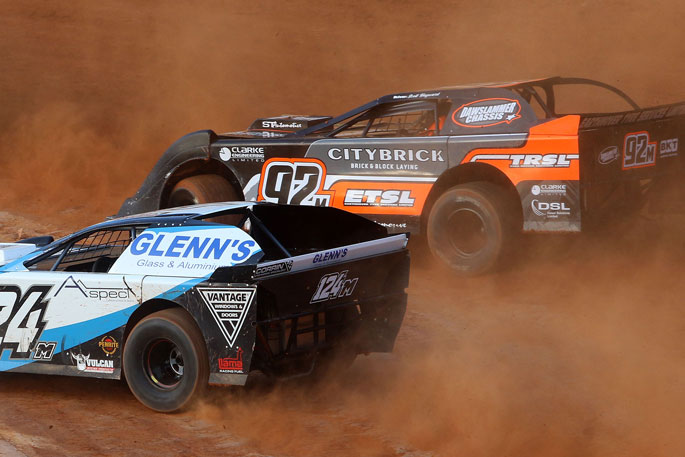 Dan Corrin made up for a late start to the racing season by powering to the front and winning the King of the Bay Super Saloon Car title at Baypark Speedway.

Corrin missed the first two meetings of the new season while building a new trailer, but the former North Island champ has quickly re-joined the front-runners in the Super Saloon ranks.

An exciting 20-lap King of Bay feature race on Saturday saw Scott Hayward and Chris Cowling both take turns in the lead before Hayward’s car came to a halt and Cowling then had a scare when an oil fire briefly erupted under the bonnet.

That set up a four-lap sprint to the finish and a three-way battle as Corrin, Steve Cowling and impressive rookie Super Saloon racer Damian Orr all staked a claim for the title.

The final lap began with the trio crossing the start-finish three-abreast and Corrin took the middle line into Turn One to get his nose ahead and edge Cowling by 0.6secs at the finish.

“It was great racing. The three of us were all over the place,” says Corrin.

Corrin’s attacking style saw him venture wide onto some bumpy sections of Turn One and Two looking for outside passing opportunities.

“It was pretty rough around there but I kept it pinned and held on. I lost some ground a few times but made it up other times and it worked out in the end.

“The car was perfect in those conditions. We kept the set-up loose so I could put the car where I wanted.” 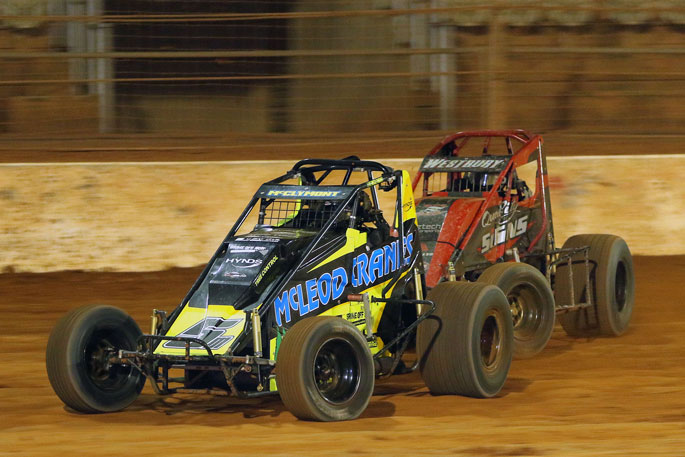 Luke McClymont (5) battles with Boyd Westbury on his way to victory in the King of the Bay title for Six Shooters at Baypark Speedway.

The pair battled throughout the King of the Bay finale where McClymont also made use of the outside line into Turn One to making his winning move and led home Westbury and Cole Wood.

Cambridge racer Jarred Fletcher traded the heat race wins with Ashleigh Halcrow (Palm Nth) but after some chassis tuning he had too much pace in the 15-lap feature and drove away to a clear win from Halcrow.