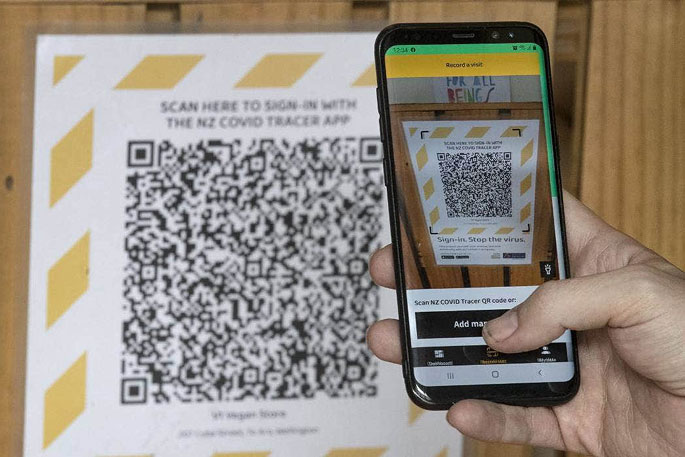 With Omicron knocking on New Zealand's doorstep, there is concern about how the country's contact tracing system will cope when it begins spreading in the community.

The system came under severe strain when Delta leaked into the community back in August. Delta is less transmissible than Omicron.

University of Auckland research fellow and technologist Dr Andrew Chen told Morning Report that widespread use of the Covid-19 tracer app could prove vital as health authorities try to keep Omicron out of the community.

Chen says the rate at which New Zealanders are scanning QR codes is "well above" the rate shown at this time last year.

"The catch with that is it's still not everyone so we've probably got about between one-and-a-half to two million people participating on a regular basis and that means there's probably another million or so that aren't really doing it as much as they should be,” says Chen.

Although some people became complacent in their contact tracing habits during the Delta outbreak, Chen says the constant stream of news tracking the spread of the Omicron variant around the world may have led to a bounce back in vigilance.

"Once Omicron gets here it will be very difficult for us to stamp it out and then our response would have to move to managing it again."

With the threat of the Omicron variant, Chen says people keeping detailed Covid tracer logs may well be the difference between health authorities being able to contain a singular Omicron community case rather than it turning into an outbreak.

"If the person who gets Omicron and is in the community has been actively using the NZ Covid tracer and has a good diary and has been using the Bluetooth then that will significantly improve the speed at which contact tracers can get out there and find those close contacts.

Chen says "speed is key" when dealing with any variant of Covid-19 and urges people to scan in regularly so contact tracers have the best chance of tracking any potential spread of the virus.

Who wants to be tracked every where locally or internationally. Had a self inking rubber stamp made with my contact details - one of cost and cheaper in the long run.

And the simple question is !!

Have they taken into account that 20% plus of the "older" population that have "simple" cellphones, just use them to receive & and make CALLS, and perhaps the odd text !! They DON’T and won’t pay the $30/$40/$60 monthly plans for "everything" especially the so called massive "data plans" that they will NEVER use. AND yes I have cheap plan and NEVER get close to the monthly "call limit" (30 minutes), and NEVER do texts.