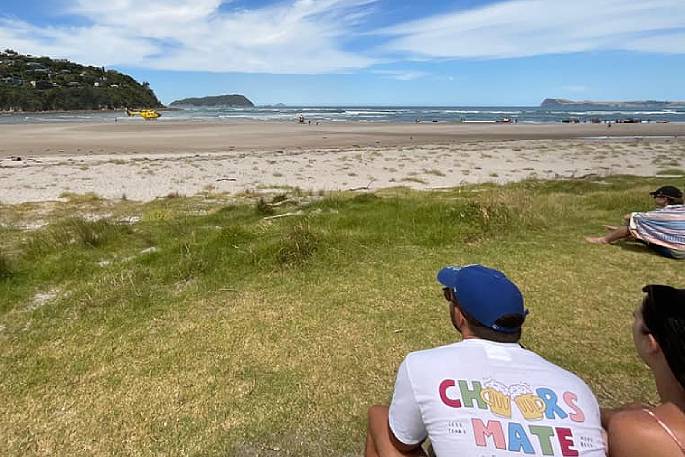 Waikato Regional Council's harbourmaster is imploring boaties to know the conditions before heading out.

He says "good luck" has played a part in saving the lives of people thrown into the water during several separate bar crossing incidents in the Waikato so far this summer break.

The incidents have prompted a reminder from Waikato Regional Council’s maritime officers of the importance of thoroughly checking marine weather, paying close attention to the swells, and always going out with an experienced skipper prior to attempting a crossing.

In the first incident on Tuesday, Decembe 28, three people ended up in the water while crossing the Raglan bar, on the region’s west coast. They were rescued by a jet skier in the area.

Less than a week later, on Monday, January 3, two people were thrown into the water at Tairua, on the Coromandel Peninsula’s east coast. They were picked up by a surf life saving club IRB.

On Tuesday, January 4 at Matarangi, again on the peninsula’s east coast. A skipper anchored and requested help after his vessel lost engine power just outside the bar.

Another vessel went to their rescue, successfully transferring everyone into their boat and towing the first vessel over the bar. However, the rescue vessel also lost power and was swamped by a wave.

A regional council maritime vessel responded and coordinated the initial rescue, which involved the use of jet skis to recover the six people from the water.

While this was happening, a third vessel coming back in over the bar also lost power. The skipper quickly deployed the anchor to stop the boat from being dragged back over the bar on the outgoing tide.

The regional council maritime officers were able to pick up the anchor and tow the vessel back to the harbour without further incident.

While the above boaties were lucky to walk away from the incidents, yesterday's incident left three people in critical condition after a boat overturned on the Tairua Bar.

Unconfirmed reports suggest the boat may have been assisting a kayaker in trouble, as reported by Coromandel's CFM.

"There’s been a lot of vessels out on the water and overall we’re seeing good compliance with the safety rules, which is really pleasing," says Regional harbourmaster Chris Bredenbeck.

"But it’s a real worry to have had these separate bar crossing incidents on both our coasts. It’s the riskiest activity you can carry out on the water, and it appears from our early investigations into each of the incidents that it was good luck nobody was hurt.

"The vessels in each of these incidents were substantial, between 5 metres and 8 metres in length. But the weather conditions at Matarangi were such that there was a very high risk at the time, and inexperience played a big part in the Tairua incident with a brand new boatie crossing at low tide."

Bredenbeck says weather, current and tide conditions cause waves to break in an unpredictable pattern on bars, creating an unstable and hazardous environment.

The best time to cross a bar is anytime within three hours before high tide. As a general rule, coming back up to three hours before and one hour after high tide is the best. All other times should be avoided, and a bar should never be crossed at low tide or at night.

Bredenbeck says boaties planning to undertake a bar crossing should:

-thoroughly check marine weather and pay close attention to the swells seek local knowledge before attempting to cross a bar secure loose gear and ensure everyone is wearing a securely fitted lifejacket -always take two forms of waterproof communication so help can be sought if needed contact Coastguard on VHF to let them know your intentions to cross the bar and that you have made it across safely spend some time observing the bar before attempting to cross it.

Waikato Regional Council has links to bar cameras and safety videos which demonstrate how to navigate safely across a bar. Go to waikatoregion.govt.nz/safe-bar-crossings.