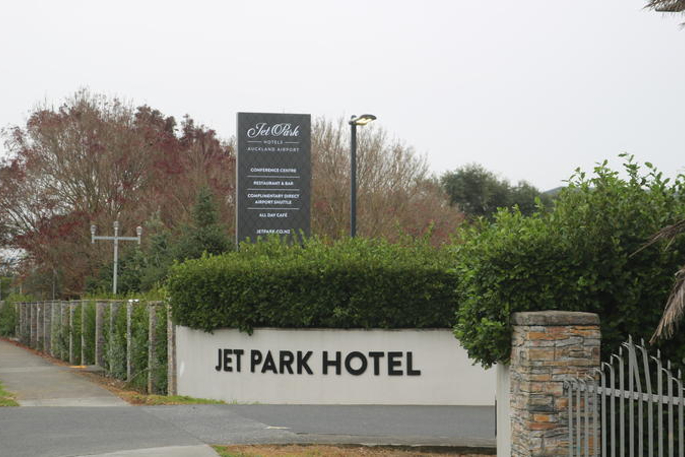 The study looked at how Covid-19 was transmitted at the Jet Park Hotel in Auckland last July. Photo: RNZ / Katie Todd.

Airborne transmission is the most plausible explanation for the spread of Covid-19 in an Auckland quarantine hotel, according to the "globally important" initial findings of a study.

The research studied how a solo traveller transmitted the virus to three others staying at the Jet Park hotel last July.

The public health investigation found the group was in a separate room, two metres across a corridor, and had no direct contact with the person carrying the Delta variant.

Genome sequencing linked the trio's infections back to the solo traveller, leading researchers to conclude airborne transmission was the most likely scenario.

The solo traveller, called person A, arrived in New Zealand from a different country on a different date to the three others, who were part of a group of five known as B, C, D, E and F.

Person E had already tested positive for the virus, while the other member of the group, person F, was fully-vaccinated and never contracted Covid-19.

Transmission could only have happened at the hotel, the researchers found.

"This public health investigation demonstrates transmission from A to B, C, and D while in the MIF, with airborne transmission the most plausible explanation," the study found.

"These findings are of global importance for coronavirus disease public health interventions and infection control practices."

Researchers could not confirm if the guests were wearing medical masks when they opened their doors, but it was standard policy at the quarantine hotel.

"Person A did not leave the room at any point during their infectious period, likely resulting in a high concentration of viral aerosols accumulating in the room," the report said.

"Our findings support the hypothesis that during episodes of simultaneous door-opening, airborne particles in the room of person A rapidly diffused down a concentration gradient, across the corridor, and into the rooms of group BCDEF."

I am really skeptical about this finding. Exposure across a 2 metre corridor for around 5 seconds on 4 occasions: a total of 20 seconds? Not impossible, but VERY unlikely. There has to be another explanation. What about shared utensils, crockery, trays, trolleys that things are delivered on? We could expect cutlery and crockery to be carefully sterilized but not every object or person who had access to both rooms... One tiny failure in the hygiene protocol seems more probable than a 20 second airborne exposure. So now the World will be told that this virus is so incredibly virulent it can airborne infect across a 2 metre space, in seconds. We know it IS more virulent than Delta, but this is stretching credibility. Sorry, I don’t buy it...