Kaitiaki based on site at Omanawa Falls 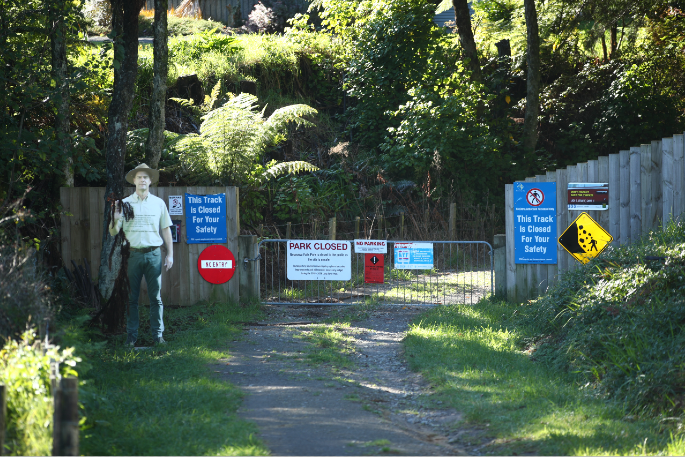 The Omanawa Falls are currently closed to the public for safety reasons. Photo: John Borren/SunLive.

Kaitiaki (guardians) will be based on site at Omanawa Falls again this summer.

The kaitiaki from Ngāti Hangarau will be based at the falls to educate all manuhiri who attempt to visit around the life-threatening dangers involved, as well as the cultural reasons to respect the area, says Tauranga City Council.

Omanawa Falls is within the rohe of Ngāti Hangarau.

“The kaitiaki programme last summer was very successful at deterring people from visiting the Falls.

“To ensure all people are aware of the dangers, the site closure is also clearly signposted to visitors.”

A man died in January 2021 during his attempt to visit the falls. Student, Kishore Kumar Arvindan, 27, drowned in the pool at the base of the falls in 2018.

Numerous others have also been seriously injured at the falls.

Kaitaiki will be based on site most days at the Omanawa Falls until the end of summer.

The Omanawa Falls are currently closed to the public for safety reasons and Tauranga City Council has been working closely with Ngāti Hangarau and Tourism BOP to re-open them in the future.

“Together with Ngāti Hangarau and TBOP we have gone through a co-design process to provide physically and culturally safe access to Omanawa Falls,” says a council spokesperson.

“The design provides for viewing platforms, an upgraded track as well as carparking and public toilets.”

Council and Ngāti Hangarau have jointly lodged a consent for the creation of culturally safe access to the Omanawa Falls.

A decision on whether consent will be approved to go ahead with the co-created design will be decided following a hearing in April 2022.

Director of Spaces and Places, Paul Dunphy says the presence of the kaitiaki are vital to spreading awareness of why the Omanawa Falls pose significant danger, as well as why they need to be respected as an important waterfall in the whenua of Ngāti Hangarau.

Council, Ngāti Hangarau and Tourism BOP continue to ask people not to visit the falls and highlight that there are a number of other fantastic falls in the Bay people can visit.

Are you seriously trying to justify paying a select few to sit around and do nothing for weeks on end at ratepayers expense...? Put up hoardings and large warning notices and let nature take its course as it has for centuries.

We walked this track many times in the 80-90s without incident. If you need a PAYED kaitiaki at the entrance all summer to save people from themselves or isn’t it time to completely block off the entrance and if people still get in then let nature take its course

People who worry about cost

The cost of having caring people is cheaper than the cost of rescue crews heading in. Also saves anxiety to families when a loved one is hurt and unknown to them.

Does this mean, that other than manahiri (whoever they are), do not need to be educated, i.e. 83 % of us Kiwis?

Volunteers...? Or are ratepayers funding the living wage or a substantial tax-free koha to "Volunteers"...?