ClimateWatch: How January is shaping up? 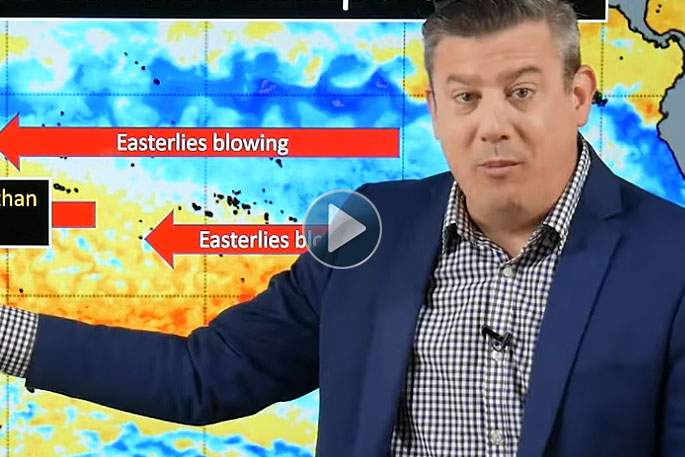 La Nina remains with us, but only just, says WeatherWatch.co.nz

"The warmer than average sea conditions north of NZ continue to produce big rainmakers in the tropics, in particular the Coral Sea area which can often see lows drifting south into the Tasman Sea.

So the fact there is heightened activity there across December and now into January and February too, means it’s an area for New Zealanders to monitor, says the weather organisation.

"However, the high pressure zone coming out of the south of Australia and Southern Ocean area is quite consistent as it tracks from west to east.

"These highs act as an invisible brick wall, keeping those tropical lows in the tropics and bringing drier weather to NZ for holidaymakers.

"But each time the centre of a high passes over NZ and then departs to our east it gives an opportunity for one of these tropical lows to drop southwards. It all depends on if there is a ‘gap’ large enough between the departing high and the next incoming high to let a low pressure zone/rain maker drop southwards.

"And that is really the focus of the next month or two ahead."

The maps below should help paint more detail.

La Nina is with us, but only just. By March it’s likely gone and we’re back to a neutral pattern.
La Nina is measured at the equator and NZ is halfway from the equator to Antarctica – so we’re influenced by La Nina patterns but not always dominated by them (which is why NZ has had cooler weather lately too, especially in parts of the South Island). 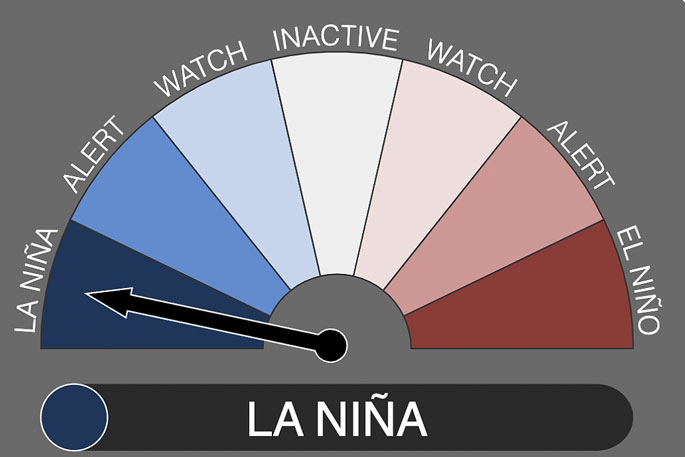 Graphic thanks to the scientist at Australia’s Bureau of Meteorology

HOW JANUARY IS SHAPING UP… 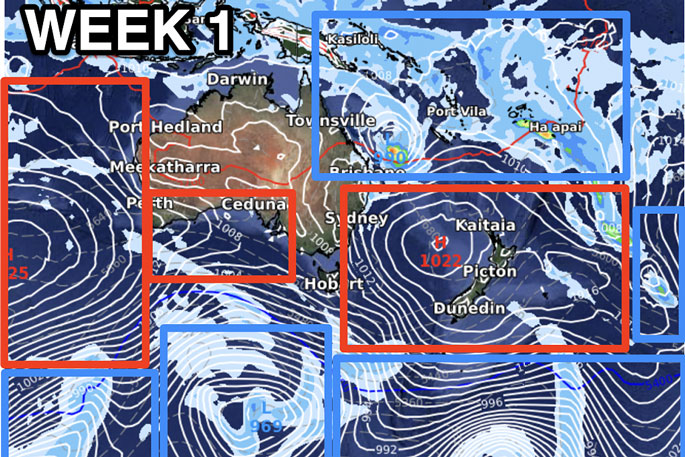 Week 1 of January – Shows high pressure dominating NZ and keeping it mostly dry here. A tropical low in the Coral Sea is worth monitoring. You’ll note high pressure from NZ links up to high pressure west of Australia over the southern Indian Ocean and these highs are tracking eastwards (from the left to the right). 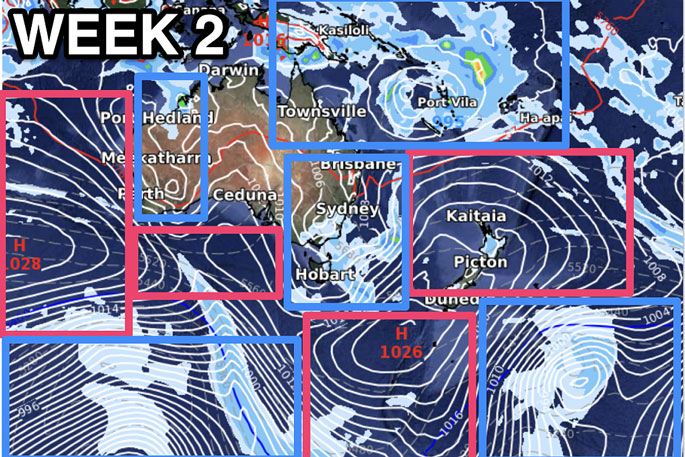 In Week 2 – A messier map but NZ still is under high pressure. That tropical energy appears to be sliding down the eastern side of Australia with NZ still protected by high pressure (some afternoon downpours likely in NZ though). Also the Coral Sea / New Caledonia / Vanuatu area looks very active as La Nina peaks up there with warmer than normal sea surface temperatures – and this fuels tropical lows. If the high over NZ just changes shape a little, that alone can bring in a tropical rainmaker. One to monitor. 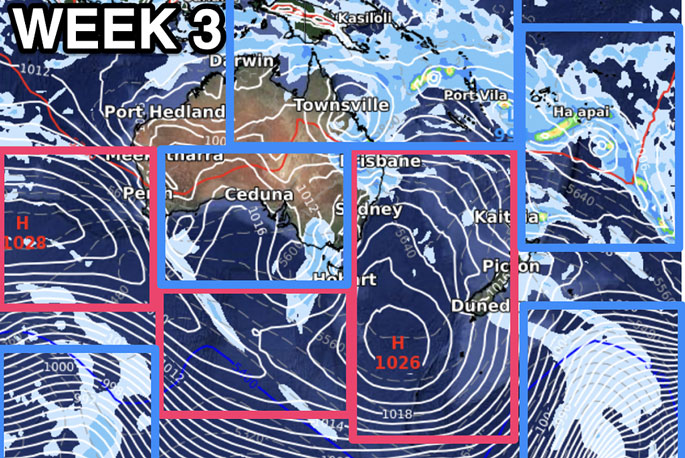 Week 3 – As you can see, right through January the Coral Sea area (east of Queensland) is very busy with low pressure zones. Very normal in a La Nina summer. With NZ so much further south though, we’re getting influenced by the Southern Ocean high pressure zones – and if this map for Week 3 remains accurate it will mean another cool southerly moves up southern and eastern regions of NZ. 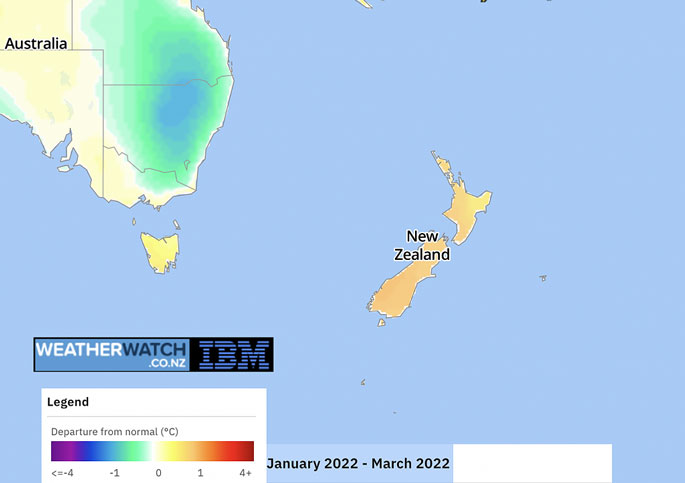 TEMPERATURES – DEPARTURE FROM NORMAL
JANUARY, FEBRUARY, MARCH
Shows NZ leaning half a degree to 1 degree above normal. The opposite to what is forecast for New South Wales. 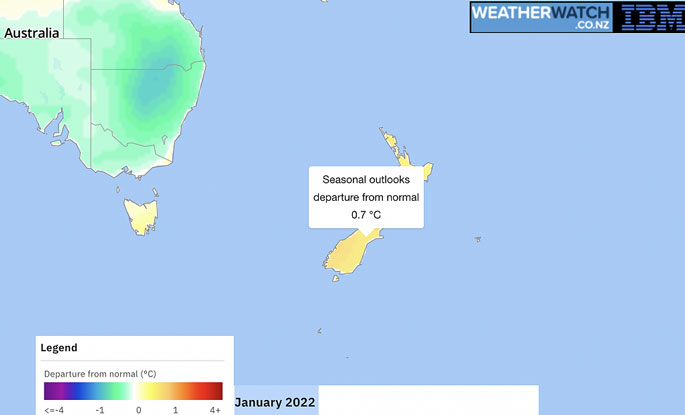 TEMPERATURES – DEPARTURE FROM NORMAL
JANUARY ONLY
Most of NZ leans about 0.7C above normal. If you’re in the South Island and maybe thinking the daytime temps have been down, this may be true – but milder overnight conditions may also be leading to a warmer than usual January. 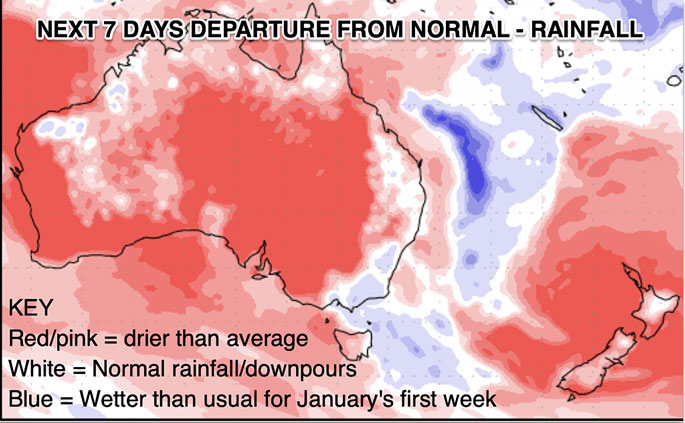 NZ is stuck under high pressure for the first week of January, meaning it will be fairly dry. The white areas in the upper South Island and upper central North Island are most likely connected to heavy afternoon downpours. The Tasman Sea is blue due to tropical rainmakers from the Coral Sea area dropping southwards. This data thanks to the US Govt and taxpayers – sadly NZ Government Agency NIWA won’t share similar data due to their own commercial reasons against the private sector. Extremely disappointing. 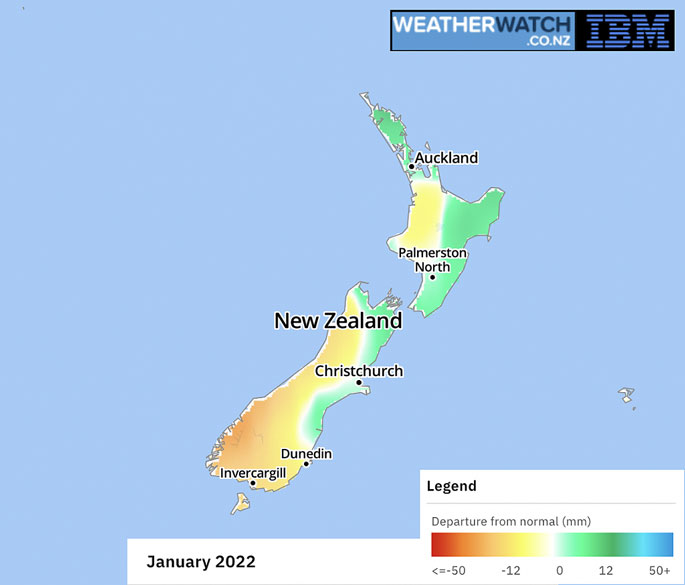 LONG RANGE – RAINFALL DEPARTURE FOR NORMAL
JANUARY ONLY
As you can see the North Island is expected to get some rain, a combination of heavy afternoon downpours inland that drift, and also the chance of one of those tropical / sub tropical rainmakers moving through. Canterbury’s trend of leaning wetter continues on to some degree. 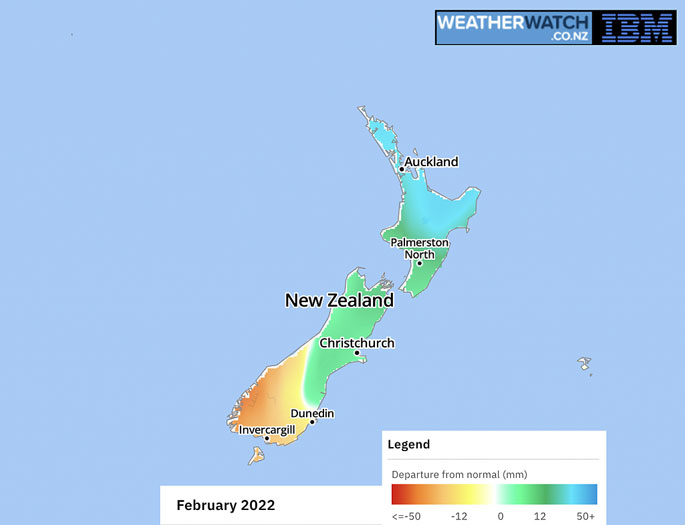 RAINFALL – DEPARTURE FROM NORMAL
FEBRUARY ONLY
Looks like an even greater chance of La Nina rainmakers influencing the upper North Island, with a chance it could turn very wet (or have a big single rain event). The lower South Island leans drier than usual, likely influenced by more southern highs. These maps are powered by IBM Watson.