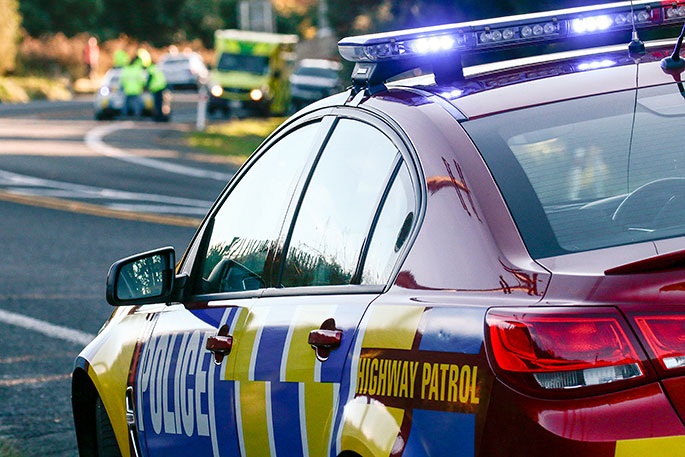 There are still two more days to go before the official holiday period finishes. File photo/SunLive.

The crash, which involved a car and a pedestrian, was reported to police at 9.40pm.

The pedestrian died as a result of the crash.

The crash had been reported to emergency services shortly after 4.40pm. Enquiries into the circumstances of the crash were ongoing.

The Christmas-New Year holiday road toll period finishes at 6am on Wednesday.

Earlier, a motorcyclist died after coming off the road in Northland just after midnight.

The male rider died at the scene on State Highway 12 in Kaihu at around 12.20am.

A motorcycle passenger received moderate injuries and was taken to Whangārei Hospital for treatment.

Road deaths are disproportionately high even despite pandemic lockdowns, the AA says in a statement released in the weekend, with 319 people killed in crashes in 2021.

The figure is only one less than the road toll for 2020, and AA policy manager Simon Douglas says it signalled that New Zealand was not doing what it could to take decisive action on road safety.

He says 100 fewer people would have been killed in 2021 if our roads were as safe as Australia's.

He says those prone to crashes are virtually immune to road safety messages and it would be far cheaper and effective to upgrade highway systems with barriers instead.

I echo your sentiments, but I’m not sure about a 20 Kph line. There are some places where 20 Kph over could be perfectly safe (low traffic open road areas with clear visibility, for example), and others where it certainly isn’t (urban and built up areas...). If people drove responsibly and according to conditions (weather, traffic, and road condition) we wouldn’t need ANY speed limits... but, of course they don’t, so we do. I don’t think a one-size-fits-all margin over the limit is a good idea, but I do endorse the thinking behind it.

What is needed is for the courts to get on board and forget about this mampy pampy PC crap and the excuses like a bad childhood, blah, blah, blah. They’re old enough to know right from wrong - period. Barriers prevent the Police from u turning and getting these idiots. More than 20kph over should be mandatory impoundment of vehicle, 6 month cancelation of license plus court (not the bus ticket office).