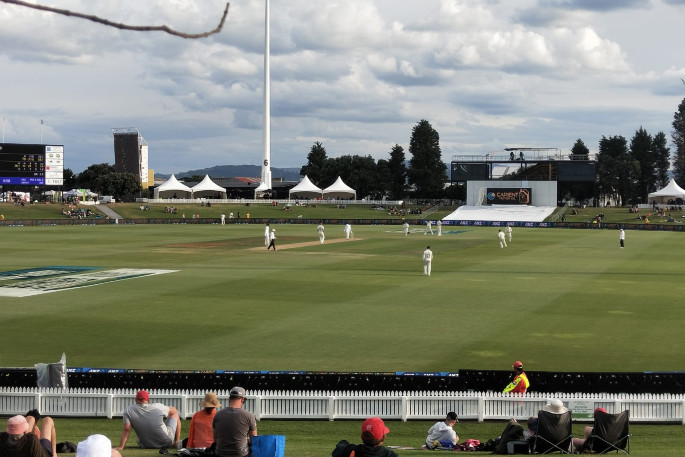 At stumps on day one of the first test against Bangladesh at Bay Oval in Mount Maunganui, New Zealand were 258-5 after Devon Conway’s second test century put them in the box seat.

One day's test cricket does not make a summer, but as a starter, it clearly indicated that the hosts have every intention to dictate proceedings, in keeping with recent trends, despite losing wicket keeper-batter Tom Blundell in the final over of the day.

New Zealand are seeking to extend their home unbeaten streak to 18 tests, stretching back to March 2017, with just four draws in that period accompanying 13 victories.

Despite the absence of injured captain Kane Williamson, the world test champions found runs batting first with Conway to the fore in making 122 off 227 balls.

He looked poised to chase a second double-ton in just his fourth test appearance before falling to the innocuous part-time left-arm spin of visiting captain Mominul Haque, an over before the introduction of the second new ball.

The Bangladesh skipper had won the toss on a brilliant Saturday morning in New Zealand's summer holiday capital and opted to field – the 17th consecutive time in home tests that the captain has taken that option after having the coin fall in their favour.

The last time a captain won the toss in a test in New Zealand and chose to bat first was South Africa’s Faf du Plessis at Hamilton’s Seddon Park in March 2019, in a drawn encounter when rain on the last day denied the Black Caps a likely victory.

There quickly developed a similar feel on New Year’s Day 2022, that initial joy would slowly drain from the visitors after an early breakthrough was unable to be pushed into something more substantial.

Conway had a close call when he had yet to score when a rejected lbw appeal was sent for referral by the tourists and the left-hander would have been thankful for umpire Chris Brown’s not out decision when replays revealed how close it was.

Opener Will Young got a second life on 27 when Bangladesh didn't appeal for a ball that beat the opener and was later shown by television replays to have grazed the bat and then caught by Das.

The duo put on 138 for the second wicket in contrasting styles to give the hosts a huge platform from which to dictate proceedings.

Young is unobtrusive – even his name indicates simplicity and sense – but he peppered watchfulness with the odd bold stroke, including a delicious on-drive as Bangladesh's early thrust grew blunt while the heat baked the pitch.

More activity surrounds Conway – there's a swiftness and excitement in his movement, as if a spark runs through the body.

He assumed the majority of the scoring and brought up his half-century with a pull for six off the gentle off-spin of Mehidy Hasan Miraz.

Young, who took 22 balls to get off the mark, would have been furious at his run-out method of dismissal and it appeared to throw Conway off his stride also for a period before he advanced to his century.

Ross Taylor walked out at the fall of Young’s wicket to a standing ovation in his penultimate test after Thursday’s announcement of his international retirement plans, and he took his trademark positive approach, minus the recklessness of his previous outing versus Mumbai in India.

He and Conway added 50 for the third wicket before an uppish drive brought his exit on 31, although a closer inspection of a possible no-ball may have given him more than a sizeable sniff at a reprieve.

There was some admirable spirit from the underdogs, who had just two days of match-play to prepare for one of the toughest tasks now in test cricket. Shoriful utilised pace and bounce to prove a pest to all batters while Das showed he was as sharp near the end of the day as he was in the morning when his fine movement and slick hands ended Conway’s stay.

But there was also less bounce in the collective step as they came out for the final session compared to the previous two, with thoughts already leaning to the daunting task ahead simply to ensure a draw remains in play as their positive outcome.