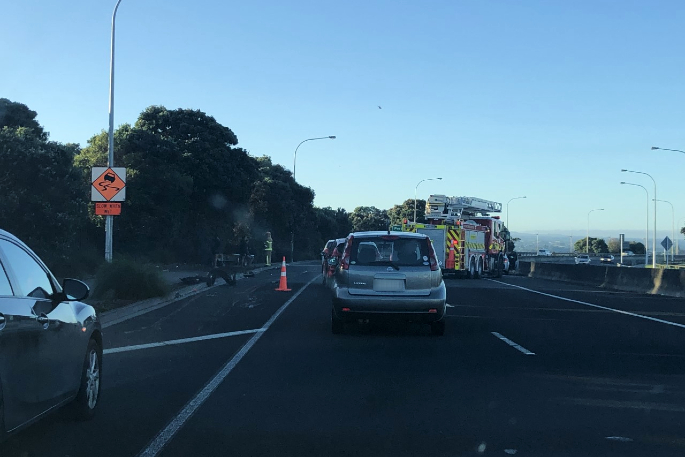 The scene of the crash. Supplied image.

A car has hit a traffic light on Te Awanui Drive State Highway 2 just past the Tauranga Harbour Bridge.

The collision occurred around 6.45am at the Tauranga Bridge Marina intersection and one of the northbound lanes is blocked, says a Police spokesperson.

“Traffic is able to pass,” they say.

“Ambulance is at the scene with the sole occupant of the car but it does not appear there are significant injuries.”

The spokesperson says contractors have been requested to clean up some debris.

wondering why Fire brigade does not carry a big bag of Saw dust and put on spills instead of calling out Contractors to clean up, sand does not soak up oil, Gosh the Cost of this must be Huge for the sake of getting spill kits for this but guys on scene today was sprinkling it on as if they had to pay for it out of their pockets, my thoughts only on this,there does not seem as if there is older men there to guide these young fellas, when driving up Kaimia and saw a car flip coming down i got out and slowed traffic,when brigade arrived a stiff shirt from same told me to go away and belittled me it was awful feeling,anyway this is only my thoughts,Sunlive No1 News Thankyou 10-4 out. phew.