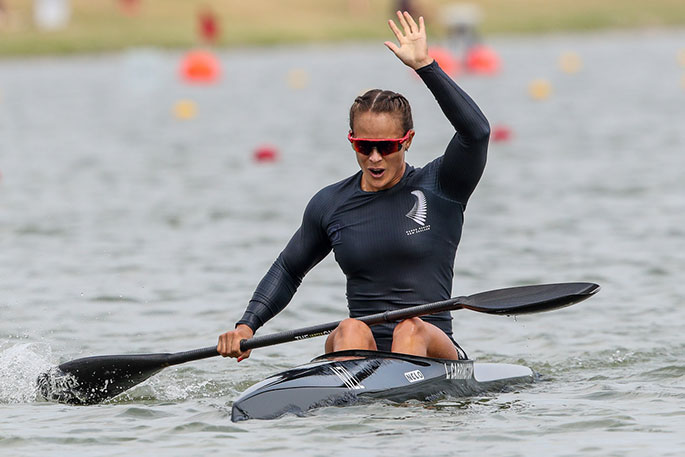 Ōhope’s Olympic hero Lisa Carrington has been made a Dame in the New Year’s Honour List, for services to canoe racing.

It caps off an incredible year for the nation’s canoe/kayak queen, who became New Zealand’s greatest Olympian at the Tokyo Olympics in August.

The Bay of Plenty heroine won three gold medals in Japan, including two in the same day, taking her overall tally to five golds and one bronze across her illustrious Olympic career.

She has won Olympic medals across several distances, including the K1 200 metres, K1 500 metres and the K2 500 metres, alongside teammate Caitlin Regal, and is overjoyed with the bestowment.

“This is a huge honour,” says Carrington.

“I feel incredibly humbled to be named alongside so many other amazing New Zealanders.

“It’s special because not only is it an acknowledgment of the work I’ve done and things I've achieved so far in my career, but it’s also a tribute to all the people who support me in what I do.”

Carrington has not only dominated on the Olympic stage but is a 10-time World Championship gold medalist, including seven successive K1 200 metres wins.

The former Whakatāne High School student is of Te Aitanga-a-Māhaki and Ngāti Porou iwi and was named the most influential Māori Sports Personality of the past 30 years in the ‘Māori Sports Awards 30 in 30’ show earlier this year.

Whilst her success on the water is one thing, Carrington has also been instrumental in the development of canoeing in New Zealand.

The Halberg Sportswoman of the Decade remains a supporter and coach of young paddlers at Eastern Bay Canoe Racing Club in Ōhope and works with Canoe Racing New Zealand to grow the support.

The success of CRNZ’s Performance Programme since 2017 is attributed to her achievements, profile and sharing of funding derived from her performances.