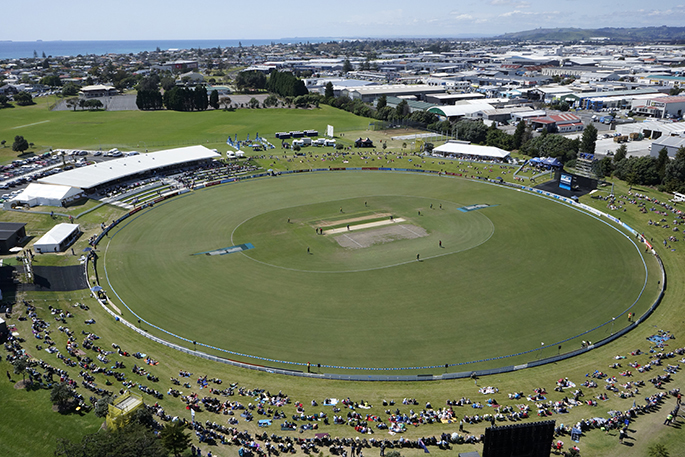 Black Caps host Bangladesh in the first test on New Year’s Day at the Bay Oval.

Devon Conway is fit and firing for his likely return to the Black Caps on Saturday after being sidelined for seven weeks because of the right hand he broke after punching his bat in anger.

In the two-day practice match for the New Zealand XI against Bangladesh in Mount Maunganui, the 30-year-old left-hander suffered another minor setback on his playing comeback on Tuesday.

He was out for a second-ball duck to Bangladeshi quick AJ Chowdhury after an edge to the slips in overcast conditions at Bay Oval, where the Black Caps host Bangladesh in the first test on New Year’s Day.

However, Conway says his hand feels fine after a net session, albeit instead of time in the middle, after not batting in a match since his 46 against England in New Zealand's victory in the Twenty20 World Cup semifinal last month in Abu Dhabi.

“My hand has recovered really nicely and that puts me in selection for the next test,” Conway told Stuff on Wednesday.

“There is tenderness here and there, but it's nothing too serious and doesn't really worry me that much. I’m fit, firing, and excited to go if I do get selected.”

His dismissal in the Black Caps' ultimately successful run chase stung. He punched his bat in frustration after he was stumped by Jos Buttler when England appeared to be in control, but Daryl Mitchell blasted the Black Caps into the decider with the innings of a lifetime (72 off 47 balls).

Scans then revealed Conway had broken the fifth metacarpal in his right hand, forcing him to miss the final (which the Black Caps lost to Australia) and the two-test series in India.

Conway could only watch as his team-mates were undone by India’s spin, losing the series 1-0, but he is almost a certainty to open against Bangladesh for his first test in New Zealand after a successful tour of England in June.

He spent 76.4 overs fielding “in the dirt” on Wednesday and says there were no major issues with his hand, catching lots of balls at mid-off.

“The grip strength [for batting] has come back nicely. That hasn't hindered me too badly,” Conway says.

“Fielding might take a bit longer to get back to full strength because of the jarring of bones and muscles.”

Conway's duck will not be of great concern for the selectors after his astonishing first year of international cricket, including the three memorable tests in England, with his 200 on debut at Lord's and a crucial 54 in the World Test Championship final success over India in Southampton.

“Even though it was a practice match, once you get out, you've got to accept the consequences that come with that,” Conway says.

“It would have obviously been better being out in the middle, but I still had a good day of training.”

The South African-born batter is expected to open with stand-in captain Tom Latham at the Bay Oval for his fourth test and has learned a straightforward lesson following his “freak accident”.

“My message to other cricketers out there would be to try and control your emotions in the heat of battle.

“And try to avoid punching your bat.”

Meanwhile, in reply to the New Zealand XI's 146-7 declared, in which Wellington's Jakob Bhula top-scored with 57 after adding to his overnight score of 21, Bangladesh were 269-8 at stumps on Wednesday.

Black Caps paceman Neil Wagner didn't get a wicket from his 14 overs after scores of 66 from Mahmudul Hasan Joy and Mushfiqur Rahim, as well as 41 from wicketkeeper Liton Das.