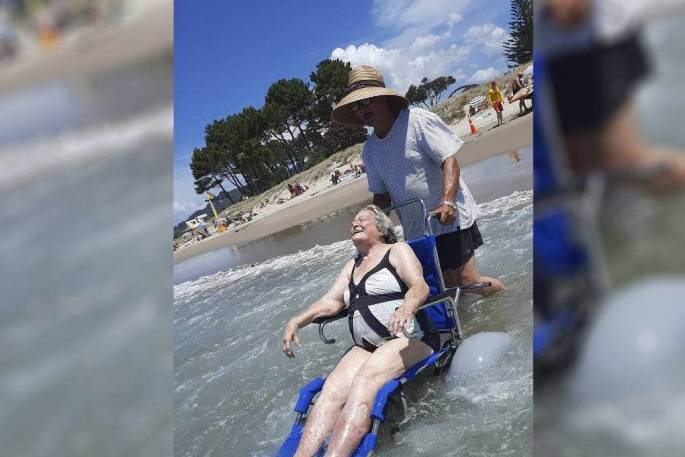 Judy McGregor, 88, said this moment was “out of this world

Judy McGregor will treasure the moment a beach wheelchair gave her.

The 88-year-old from Auckland lost her husband during the August lockdown and had to grieve on her own.

Being able to get in the water for the first time in 40 years thanks to the new beach chair in Whangamatā made her year.

“It took me back to my childhood years,” McGregor told Stuff.

“I screamed on every wave. It was out of this world.

“I never knew I could have so much fun.”

A community group raised money for two beach wheelchairs – one for an adult and another for a child – so that people with disabilities can access the beach.

Zac Schultz, nine, who has cerebral palsy, was one of the first to take the chair for a spin and enjoyed being pushed along by this dad Rob in the surf.

Available to the public for a small koha, group secretary Rosemary Drake says the chair has already created some special moments for beachgoers previously unable to reach the beach.

“The community has really got behind this,” Drake told Stuff.

“With the number of people who come to Whangamatā over summer we felt it was important that everyone got the opportunity to enjoy this beautiful beach.”

She says the idea came about after another local, Marika Donk, saw the chairs advertised online, which prompted a community meeting where everyone was on board.

Five weeks later the group, called Toes in the Water, received more than $16,000 from the community allowing them to purchase two chairs and two walkers.

While the chairs have only been up for hire for two days, Drake says they have already received great interest.

The wheelchair access has already created some special moments for people.

Zac and his father had fun on Monday - the day after McGregor’s experience - splashing in the waves.

Rob says Zac is able to walk and swim but not for very long distances.

The chair has allowed him to spend more time on the beach, he says.

“Zac loves the water, but usually the next day his whole body aches, and he has to sit it out from beach days.

“Having this chair available means he doesn’t miss out on just being a kid.”

Group treasurer Donna Lowirn says the group plans to operate from Labour weekend to Easter between 10am-4pm each year.

A soon-to-be developed booking system will allow people to book two-hour slots for a small donation.

The membership will allow people to book a time whenever they want through the season, she says.

“We are also getting a mat for wheelchair access onto the beach which we expected to have in January,” Lowirn says.