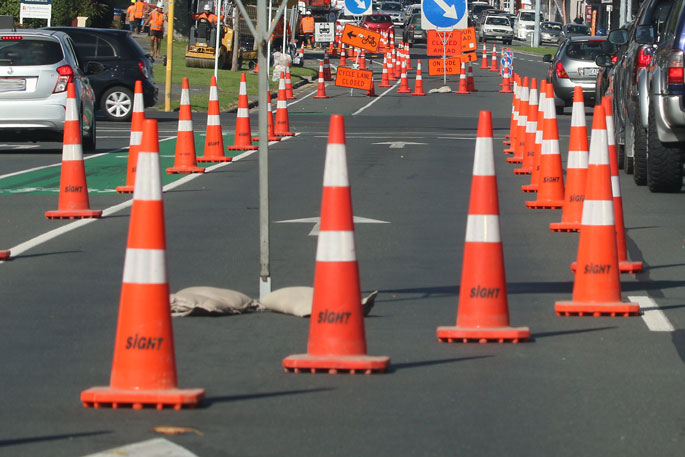 A number of projects have been planned for January. File Image.

A number of road work projects are being planned for Bay of Plenty and Waikato roads next week.

For drivers in the Bay of Plenty, they are being warned to expect longer than normal delays on Takitimu Drive, SH2 near the Bay Link project, SH2 from Waihi to Omokoroa and Te Puna.

Starting January 5, 2022, Waka Kotahi Transport Agency is planning to commence work on a 500m stretch of Takitimu Drive, under the Waihi Road overbridge.

"The road will be reduced to one lane in each direction from January 10, 2022, for about three weeks," says a spokesperson for the roading agency.

"The purpose of these works it to repair the pavement, road surface and underlying layers and to upgrade the drainage."

The roading agency is also planning on closing SH2, between the Bayfair roundabout and the Te Maunga intersection from 1am on Saturday, January 15, until 5.30am on Monday, January 17.

NZTA says the works are to allow barriers and ducting to be installed n the SH2 bridge, as part of the Te Maunga interchange on the Bay Link project. For more information about this closure visit nzta.govt.nz/temaunga

See below for additional road works scheduled to being in January.

State Highway 5, Tarukenga to Ngongotahā: Remaining road widening and further barrier installation, landscaping and road rehabilitation will take place in the new year. These works will recommence on 10 January and are expected to take until the end of February 2022 to complete.

State Highway 30, Sala Street to Iles Road: Only minor works are expected to take place in the new year. The majority of these will take place outside of traffic lanes, with some occasional lane and shoulder closures required. These works will recommence in January. Final surfacing is expected to take place as part of the maintenance programme between Puarenga Bridge and Tarawera Road in March/April.

SH30, Iles Road to Basley Road: Construction for the SH30 Eastern Corridor Stage Two is expected to start in January 2022. In the first months, you’ll see excavations, road widening and service relocation works taking place. Traffic management will be in place and access to properties will be maintained although this may be restricted during the works.

State Highway 1 Waikato Expressway, Ohinewai: The northbound lane of SH1 between Ōhinewai and Rangiriri will be closed overnight from Monday 10 January, between 7pm and 7am, for up to five nights, weather permitting. All northbound traffic will be detoured from Huntly at the Tainui Bridge, along Te Ōhākī Road, over the Glen Murray Bridge then via local roads to the Rangiriri interchange.

There will also be drainage works underway at the intersection with Glentui Lane in January, under similar traffic management.

SH2/State Highway 26 Paeroa roundabout: General maintenance work, including the installation of new hit sticks, will take place at the SH2/SH26 Paeroa roundabout in January. Contractors will time their work for outside peak traffic periods.

State Highway 27 Mangawhero Stream bridge: SH27 will be detoured south of Matamata from 10 January to 14 April to allow for the completion of new stretches of road either side of the new bridge being built over the Mangawhero Stream. Traffic will be detoured along State Highway 29, Hopkins Road and Hinuera Road, adding around 3.7 kilometres to a journey between Tirau and Matamata. For more information, visit: https://www.nzta.govt.nz/media-releases/sh27-south-of-matamata-detoured-10-january-to-14-april-2022/

State Highway 29 and State Highway 24, western (Waikato) side of Kaimai Range: Road rehabilitation works will re-commence on SH29 and SH24 on the Waikato-side of the Kaimai Ranges from mid-January. Further details will be confirmed closer to the time. Motorists can expect lane closures and Stop/Go traffic management.

Some of the above works are weather dependent and may be postponed in the case of poor weather. For up-to-date information on road works, traffic, detours and delays, motorists are encouraged to visit the Waka Kotahi Journey Planner website (journeys.nzta.govt.nz).

Waka Kotahi thanks motorists for their patience.

"The purpose of these works it to repair the pavement, road surface and underlying layers and to upgrade the drainage." I seem to recall similar work at this location just a few years back. Have we forgotten how to build roads properly in the first place?