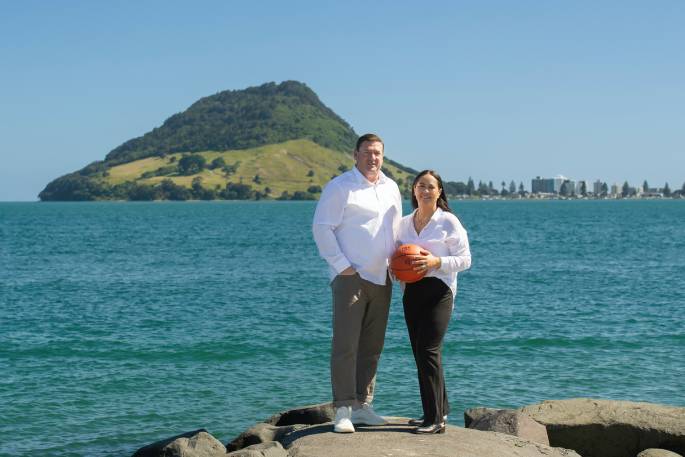 There is set to be a new name in town for our region’s sports lovers with the Bay of Plenty Stingrays being confirmed as the first expansion team to enter the National Basketball League from 2024.

The new NBL team will also come with a basketball academy as the Stingrays look to have a strong local core in their future squads.

Basketball New Zealand says the Bay of Plenty’s “exemplary” submission meant they were the first of two expansion teams set to be granted a NBL license for 2024 after a “robust decision-making process”.

“When going through this expansion process, we looked for a basketball franchise with a solid business model and a genuine desire to be successful,” says NBL general manager Huw Beynon.

“But beyond that, we wanted a franchise who would represent their community at the highest level, and who would commit to building pathways for young athletes in their region – helping to grow the game of basketball and all the positives that come from it.

“The Bay of Plenty Stingrays absolutely nailed this ideal in their submission and left us with no doubt that they were the right choice, so we are very excited for the future of basketball in the Bay of Plenty.”

The Bay of Plenty Basketball Foundation were integral in the process and spokesperson John Miller says the Foundation is committed to improving the long-term success for young basketball players in the region going forward.

"We're going to develop a competitive NBL team, who play hard to win but who also have a wider definition of success,” says John.

“The team ethos will be built around the concept of by competing we get better together.

“Knowing the benefits sport provides to communities, we're excited about the impact this will have on the region."

Alongside the NBL team the Foundation will establish a basketball academy to enable promising players to play and grow, and to support community basketball.

“As developing local talent is a primary purpose of the Foundation, the Bay of Plenty Stingrays team will join the league from 2024,” John explains.

“This gives the Foundation time to launch the academy and create a competitive team with local players.

“We want as many locals in the team as possible.”

The foundation has also announced their director of coaching will be Alex Stojkovic, the current community basketball manager for the Te Aroha Basketball Association and a long-term fixture in the basketball community throughout the Bay of Plenty and Waikato region.

“Alex brings us Basketball credibility and will oversee the development of our Academy and NBL Coaches. He has been instrumental in helping us with the setup of a Basketball Academy and with our bid for an NBL License,” says fellow Foundation leader Lorraine Miller.

“Alex’s vision for the game is shaping our vision for Basketball in the Bay of Plenty. I have seen first-hand the amazing work he has done in Te Aroha and the question I asked him about a year ago was imagine what you could do with more players?”

Te Aroha is one of seven Basketball Associations within the immediate catchment area of the Stingrays so we hope to continue working with them as Alex transitions to his new role at the end of the 2022 school and representative basketball season.

The Foundation will ask the Bay of Plenty public to help decide a name and look for the Stingrays team mascot via an online competition in early 2022.

Huw Beynon says the expansion of the NBL is proof of both the growing popularity of basketball in New Zealand.

“Despite all the challenges that Covid has thrown at sport across Aotearoa and the world, it’s exciting to see the League continue to expand and go from strength to strength each season,” he says.

“It’s great for the players, the fans and the growth of the game at all levels.”