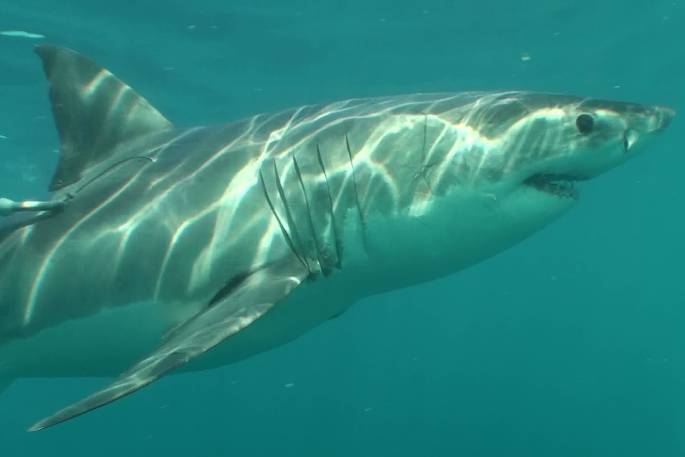 An increase in great white shark sightings in the Tauranga area has prompted the Department of Conservation to remind people to remain vigilant when out swimming and to report all sightings.

Reports of great whites have increased since May 2020 and although an estimate of the number of sharks in the area cannot be confirmed, photographic ID so far has identified six individual great whites.

Residents across the Western Bay of Plenty have highlighted a perceived increase of great white sightings in recent months especially in the area surrounding Bowentown.

In January, 19-year-old Kaelah Marlow from Hamilton died in a suspected shark attack at Waihi Beach.

However, marine biologist Melissa Kellett has been studying sharks in Tauranga for five years and says the large number of sightings are not only in the Bowentown area of the Tauranga Harbour but also along the coastline.

“Since May 2020 we have continued to receive reports of great white sharks in the area year-round and spread out through the Tauranga district,” says Melissa.

“The size estimates of these sharks have been between 1.5m-3.5m in length indicating they are primarily juveniles and sub-adults.”

DOC Marine Expert, Clinton Duffy says sighting great white sharks in shallower coastal areas and harbours is not unusual and smaller individuals appear to remain in New Zealand coastal waters year-round, making regular excursions up and down the coast and out to the edge of the continental shelf.

“Both the West and East coasts of the top half of the North Island are considered a nursery area for great white sharks in New Zealand,” Clinton explains.

Photos and video footage will continue to be monitored to determine if sightings are of the six identified or if the area is seeing a steady increase of new marine visitors.

“Tagging of sharks at Stewart Island and the Chatham Islands has revealed movements to tropical and sub-tropical regions such as the eastern coast of Australia, Coral Sea, New Caledonia, Vanuatu and Tonga during late summer - early winter for around six months before returning the following year,” says Clinton.

“It is now recognised that we have a shared population of great white sharks with eastern Australia, and we are working on an updated population estimate.”

There are about 66 types of sharks found in New Zealand waters, most of them are rarely seen deep water species, and many are threatened or endangered internationally.

Great white sharks are present around the New Zealand coastline all year round, but most encounters are between December and May as more people head to the beach and white sharks return to New Zealand to feed in coastal waters.

It is common for great whites to develop preferences for certain sites and return regularly and Clinton Duffy says if you spot a great white exit the water quickly and calmly and report the sighting to DOC.

“Sharks are predatory animals but do not normally perceive humans as prey and most encounters with white sharks do not result in the shark biting the human,” he says.

“If you are visiting the ocean you need to be a little bit vigilant and aware of what’s happening around you and swim where there are surf lifesaving patrols, and don’t swim or dive alone.

“If you are heading out on the water exercise caution and avoid swimming in the main channels where there are a lot of birds diving, or berleying from kayaks and jet skis when fishing.”

Great white sharks are protected under the Wildlife Act 1953. This means it is illegal to hunt, kill or otherwise harm them. Other species of shark protected in New Zealand include the basking shark, the oceanic whitetip, the small tooth sandtiger (deepwater nurse shark) and the whale shark.

It’s not illegal to accidentally catch a white shark but it must be released without causing it further harm, and it is a legal requirement to report the capture.