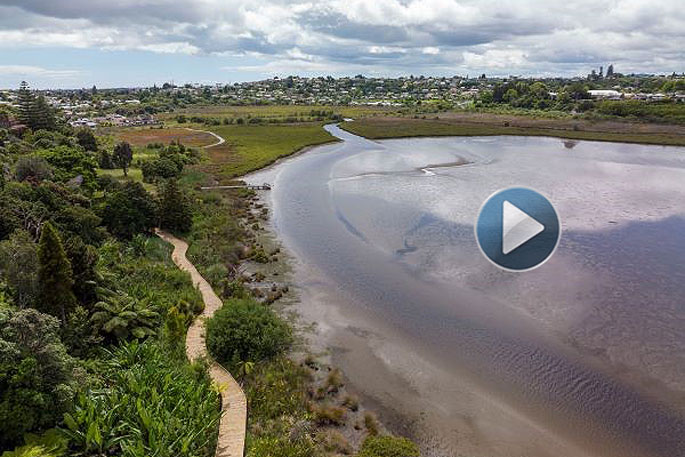 The new Bay Street boardwalk completes the walkway through and around Papahenga - the Matua Saltmarsh from Carlton Reserve to Bay Street Reserve. Photo and video by Tauranga City Council.

A new 200-metre boardwalk from Elmes Reserve to Bay Street Reserve in Matua will give Tauranga residents and visitors unrestricted access to one of the city’s most significant natural landscapes.

Papahenga - the Matua Saltmarsh - is a 21-hectare coastal wetland which helps enrich the quality of our harbour, protects our coast from erosion and provides a habitat for many species of plants, fish and birds, including the banded rail and North Island fernbird.

Representatives from one of the local hapū, Ngāwiki Dickson and Aukaha Kakau-Dickson from Ngāi Tūkairangi, joined Tauranga City Council staff, local residents and contractors to celebrate the opening of the boardwalk last week with a blessing and planting of a native Rimu tree.

The Bay Street boardwalk completes the walkway through and around the Matua Saltmarsh from Carlton Reserve on Ngātai Road to Bay Street Reserve in Matua, providing an opportunity for people to walk and cycle off-road and experience the nature and biodiversity of the saltmarsh.

The link was first proposed in 2005 at the suggestion of the then Matua Saltmarsh Advisory Committee, consisting of local hapū, councillors, the Matua Residents’ Association, Forest & Bird, neighbours and students from Ōtūmoetai College and Ōtūmoetai Intermediate.

“It has subsequently been pushed out by previous Long-term Plans so it’s fantastic to see it finally completed in 2021,” says Tauranga City Council’s spaces and places director Paul Dunphy.

“A special thank you to Higgins Contractors and CGC for constructing the boardwalk and to the local community for their support and for living with the disruption during construction.

“This is going to be a great asset for the people of Matua and the wider Tauranga Moana.”

Tauranga City Commissioner Shadrach Rolleston says it’s great to see this last connection to the saltmarsh completed for the community to enjoy.

“It gives people a chance to connect with our natural environment, particularly as we continue to grow as a city. These areas are great for both biodiversity and recreation and we want to do more of this across the city.”

Gary and Honor Rand live at the end of the boardwalk in Bay Street and are delighted to see it open.

Gary’s father Jack owned a large piece of land in the area, including what is now the Bay Street Reserve and Sunny Bay Road.

In the late 1990s Gary donated the land the boardwalk sits on, retaining a section to live on.

“The boardwalk has been beautifully done. It’s very peaceful and I know it will be very well-used,” says Honor.

“It will also enable us to care for the native trees better. For a long time, I would go in there and tackle the wild ginger with my secateurs.”

Piles for the boardwalk were helicoptered onto the site and the design took into consideration the impact on the native vegetation.

“During the creation of this boardwalk it was important to work with the natural environment as much as possible. As you walk along the boardwalk you will notice lots of curves which enabled this,” says Paul.

The saltmarsh is an area of cultural importance to tangata whenua as a site where traditional kaimoana (seafood) gathering occurred.

When Otūmoetai land was confiscated after the battles of Gate Pā and Te Ranga in 1878 the land was sold to private ownership and in time became the farms of the Tollemache, Snodgrass and Matheson families.

In 1969 the saltmarsh zoning was changed from rural to residential, however this was overturned on appeal to the Planning Tribunal. In an agreement between Council, the Department of Conservation, and the Queen Elizabeth II National Trust, 25 hectares was placed under a covenant to protect the future use of the land.

Walkway development and ecological restoration began in the late 1990s with local school children and other community groups involved in planting flaxes, cabbage trees and other native species to replace invasive plants such as pampas grass.

In 2000 the project was the recipient of the Department of Conservation Ramsar award.

just more accessible for idiot-people to abuse and litter, are u gonna go around picking up bottles, rubbish, and shopping carts?

Something actually worth spending money on, unlike a Museum that will never be used by anything like the same number of people