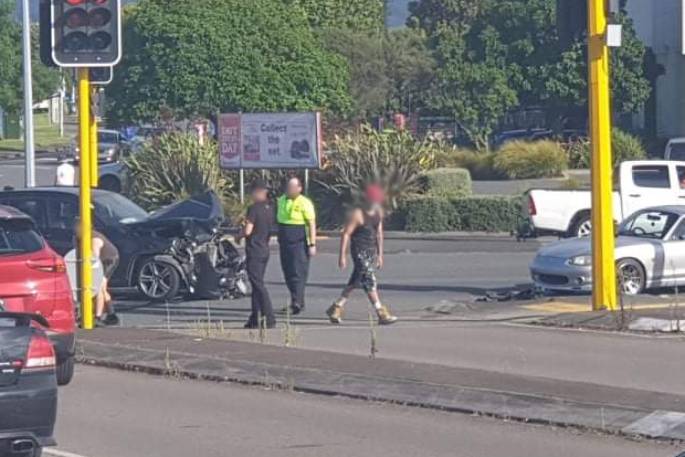 A multiple vehicle crash is causing traffic delays at the intersection of 23rd Ave and Cameron Road.

Police were notified of a crash at the intersection just before 6pm.

A police spokesperson says the crash is reported to involve multiple vehicles.

“Police are assisting with traffic management and it looks like we will be closing off 23rd Ave.

“Occupants are being assessed by attending ambulance staff and a tow has been called.”

A witness to the crash who lives nearby says they heard a loud bang and came out to investigate what had happened.

"It happened at the 23rd traffic lights.

"The fire brigade laid down sawdust because of fluid across the road.

"Traffic is built up on all directions as people are sweeping up debris.

"Debris everywhere from parts of the car and glass. Traffic is detoured."

But the number of red light runners in Tauranga is ludicrous. The same intersection this morning I watched a black ute drive through an orange/red light doing at least 70kph. What a dickhead. Anyone or anything in that intersection would not have stood a chance. I saw a motorcyclist outside TBC powerstand a big road bike through the intersection IN FRONT OF A RED POLICE CAR. Rightfully or wrongfully the Officer did not pursue. Had he, this idiot showoff would’ve just floored it putting others at his arrogant risk. We need a major traffic blitz and hammer these idiots. The courts need to back the Police.

While we cannot know the cause of this accident, anyone who regularly drives the roads of Tauranga (as I do) will acknowledge the startling regularity that they witness people running red lights. It is not a rare occurrence by any means, a trip to town on any day and you will witness 2 or 3 incidents and this has become the norm for many Tauranga drivers. Unless there in a concerted effort to catch and to prosecute the offenders, accidents like this are going to keep happening. There is an increasing attitude of impatience and self entitlement that leads to people driving this way and I have seen many near misses already.