The Bird that measures Antarctic Ice 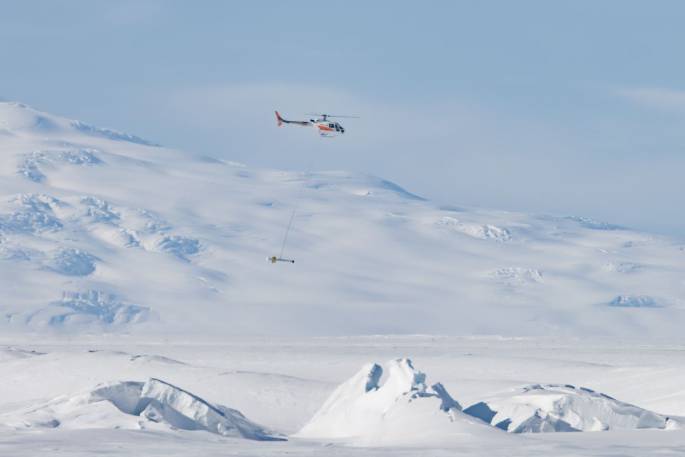 This Antarctic research season, Kiwi scientists are using new technology to measure sea ice in McMurdo Sound and help add to the understanding of its importance for climate around the world.

Their electromagnetic induction device, the ‘EM Bird’, is suspended 20 metres below a helicopter and flown just 15 metres above the surface.

Associate Professor Wolfgang Rack, a University of Canterbury Glaciologist says “we know the extent of the ice from satellites, but not its thickness.

“That’s too difficult to accurately measure by satellite, but the EM Bird is doing just that. It complements the satellite imagery.

“It’s important to know how deep the snow is, so we can measure how thick the ice is beneath it, as that is a major factor in the global climate system.

“Over winter, Antarctica ‘doubles’ its size because of the huge ocean area covered with sea ice. This great expanse of white reflects sunlight to space, and helps to mitigate climate warming,” says Professor Rack.

“The amount of sea ice also determines how much salty Antarctic bottom water is produced, a process which ventilates the global oceans, and pulls carbon down into the deep sea.

“So, a change in the volume of Antarctic sea ice has consequences for global climate. If we want to better understand how sea ice will change in the future, we also need to understand more about the snow on top.”

The EM Bird is an Antarctic Science Platform project. Director, associate Professor Nancy Bertler says it is an exciting innovation.

“If Professor Rack and his team can successfully use an aircraft to measure the thickness of the ice, scientists will be able to cover much larger areas and validate satellite measurements.

“That would allow us to take another step closer to understanding how and why our sea ice is changing and forecast global consequences,” she says.

The Antarctic Science Platform is funded by the Ministry of Business, Innovation and Employment. The researchers, from the University of Canterbury and Lincoln Agritech, are working with the Alfred Wegener Institute for Polar and Marine Research (AWI) in Germany. AWI is providing the instrument and online support for this field season.