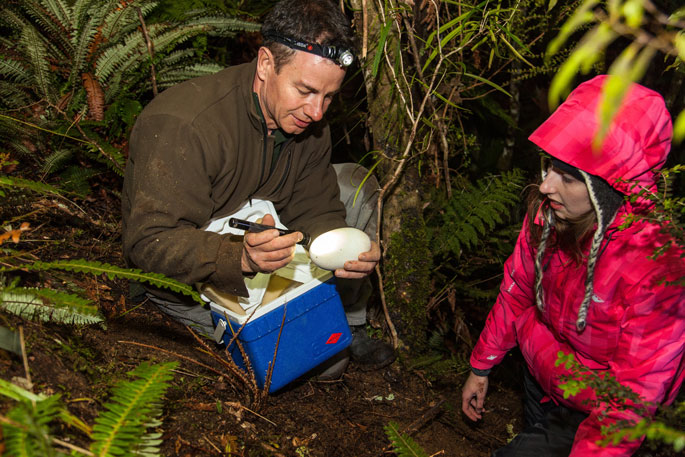 So far, 54 viable eggs have been delivered to the National Kiwi Hatchery in Rotorua in the first half of the 2021/2022 season.

It still has two more ‘first clutch’ eggs to retrieve so it is possible that its ‘half time score’ will grow to 56.

Earlier this year it completed the return of a record 53 juvenile kiwi to the bush as part of its work with Operation Nest Egg, the nationwide kiwi recovery initiative that removes kiwi eggs from their burrows, incubates them and cares for the chicks in captivity until they’re big enough to fend for themselves in the wild.

Traditionally, fewer eggs are retrieved in the back half of the egg-lifting season. These are known as ‘second clutch’ eggs. But there are already signs that the second half of the 2021/2022 egg-lifting season at the Trust’s property in the Maungataniwha Native Forest in Hawke’s Bay will also be strong.

Trust staffer and ‘kiwi whisperer’ Barry Crene says he has retrieved three eggs from two second-clutch nests. This is, he says, a promising start although he will never “count my kiwi before they’re hatched”.

“That said, we have every reason to believe that the final number of juvenile kiwi returned to the forest at the end of the 2021/2022 season will beat last year’s record by a significant margin.”

The Trust has increased by eight the number of kiwi it is monitoring this season but only four of these have nested.

It has invested significantly in, and put much effort into, catching and radio-tagging new kiwi at Maungataniwha and now has 61 ‘tagged’ kiwi there.

It achieved self-sustaining kiwi population levels at Maungataniwha in 2017 and has since been using juveniles taken from there to stock its second property, Pohokura, mid-way between Taupo and Napier.

The first, the 300th bird resulting from the trust’s conservation work, was released in 2019.

Re-establishing kiwi at Pohokura supports the long-term goal of the national Kiwi Recovery Plan; to reach 100,000 kiwi by 2030 through growing populations of all kiwi species by at least two percent a year, restoring them to their former distribution and maintaining their genetic diversity. 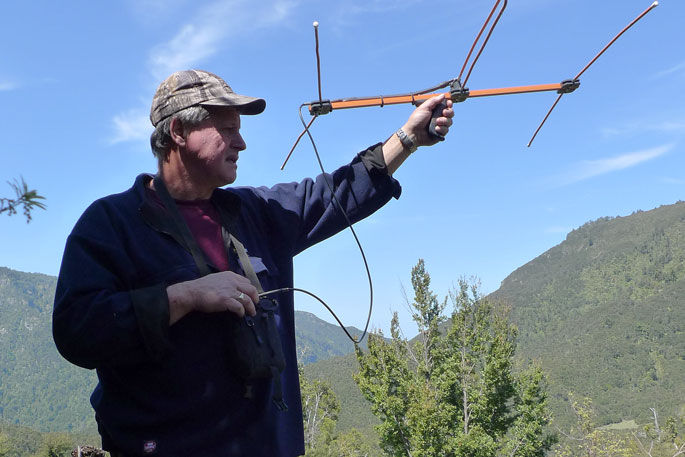 Establishing a population of around 100 pairs within five years at Pohokura will make a significant contribution towards the recovery of this species, says Trust chairman Simon Hall.

For the first three years a sample of kiwi released each year at Pohokura have been fitted with radio-transmitters so that their dispersal and survival can be monitored.

“Just as Maungataniwha can now be the source of kiwi to re-stock Pohokura, so we hope that ultimately Pohokura kiwi will make their way naturally to neighbouring areas such as the Whirinaki Conservation Forest, which is also being made safe for them.”

The Forest Lifeforce Restoration Trust has carved out a name for itself as one of the most successful kiwi conservation initiatives in the country.

Hall says its work with kiwi could not happen without the help and investment from its conservation partners, particularly the Cape Sanctuary, the National Kiwi Hatchery and its funder Ngāi Tahu, the Department of Conservation and Save The Kiwi, the only national charity dedicated to protecting the flightless national icon.

“Kiwi conservation is not just about partnerships, it’s about community,” says Hall.

“It’s about friends, neighbours and our volunteers banding together to protect this strange, wonderful little bird. Frequently in the dark and the cold and the pouring rain. They do it for love – literally.”

Michelle Impey, executive director of Save the Kiwi, says the work the Forest Lifeforce Restoration Trust had done over the past 15 years was “incredible”.

“They are one of the most prolific contributors of eggs to Operation Nest Egg, which is a massive achievement,” she says.

“They have also done a huge amount of work on predator control and habitat restoration, both of which are essential yet frequently thankless tasks in kiwi conservation. The combination of all of this work has resulted in an accelerated growth of the kiwi population in this project area and it’s fantastic to see that the Trust is now reaping the rewards.

“Save the Kiwi is very proud to work alongside Forest Lifeforce Restoration Trust to boost the kiwi population in the eastern region.”

In addition to the Maungataniwha Kiwi Project the Trust runs a series of native flora and fauna regeneration projects.

These include a drive to increase the wild-grown population of Kakabeak (Clianthus maximus), an extremely rare type of shrub, and the re-establishment of native plants and forest on 4000 hectares currently, or until recently, under pine.