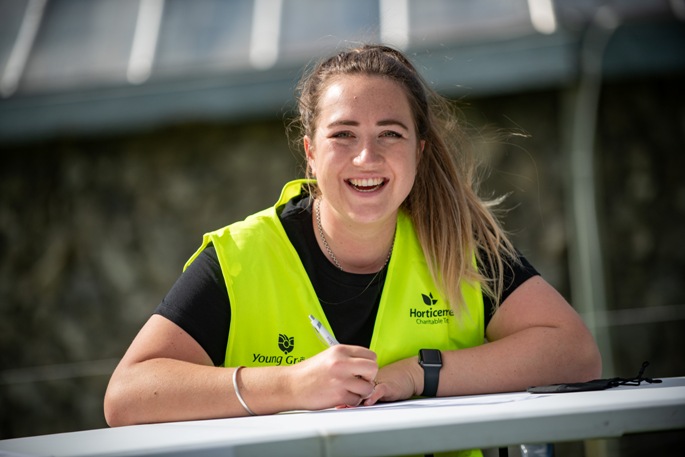 Melissa van den Heuvel, 25, from the Bay of Plenty wouldn’t change her career for the world and it’s paid off with this year’s Young Grower of the Year award going to her. Photo: Supplied.

Melissa van den Heuvel has won the Young Grower of the Year award for 2021.

Run by Horticulture New Zealand, Young Grower of the Year is an annual competition comprising regional finals in major fruit and vegetable growing areas and a national final.

The competition is to encourage young people to take up a career in horticulture as well as celebrate the success of young people in the industry.

Melissa, who is based in the Bay of Plenty is an avocado grower services representative at Apata Group.

The 25-year-old says the competition was “amazing”.

“I was up against a bunch of strong competitors and I think we all went into the competition with the same nerves. Some of the challenges were completely out of our comfort zones as well.

“I am pretty chuffed with the big win and taking out the title. The whole experience of the competition and having the opportunity to meet new people and learn new skills can’t be beaten.”

Melissa says she fell into the horticulture industry.

“I never really thought of horticulture when I was studying at university but now that I am in the industry, I wouldn’t change it for the world.

“I don’t think you can beat the satisfaction of getting to the end of the season, overcoming challenges, and delivering the best pieces of fruit to our consumers.

“The beauty with the horticulture industry is that even though I don’t have a definite idea of where I am going to be five or ten years, there are so many options and paths I can go down, while staying in the industry.

“I love the challenges that horticulture brings. No two days or seasons are the same. I love the challenge of growing – there are so many factors and things at play, which need to be accounted for in order to deliver the best piece of fruit to our consumers.

“It was great to be part of this competition and get to know my fellow competitors.  We’d all like to thank the sponsors and HortNZ for giving us this opportunity.”

HortNZ President, Barry O’Neil, says supporting young people and encouraging more of them to join the horticulture industry is critical to the industry’s continued success and growth, in what is the new normal – life affected by Covid.

“At times like these, having a cause and taking time out to celebrate it is even more important than it was before.

“This year’s regional finals were oversubscribed, which shows the inherent optimism in our industry as well as the pride inherent in providing New Zealand and the world with tasty and healthy fruit and vegetables.”

The national final was held at the Lower Hutt Events on October 20 to 21, following all alert level two health and safety protocols.

This year’s Young Grower of the Year finalists were:

For more detail, please visit the Young Grower of the Year website:  www.younggrower.co.nz