Life by the numbers 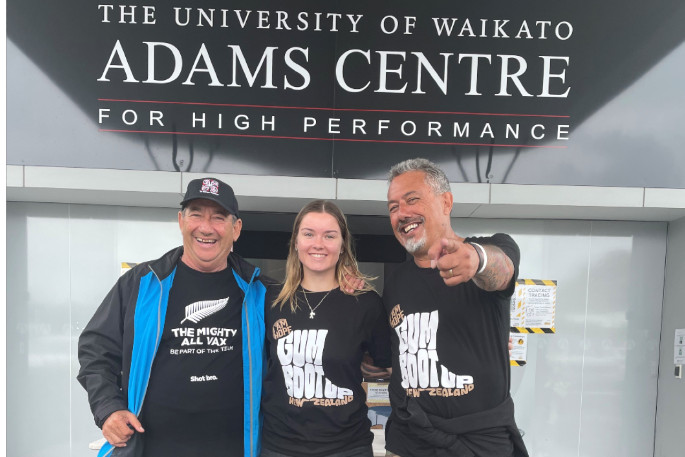 Tommy Wilson, Hayley Hope and Mike King ready to roll out the teams at The Adams Centre for High Performance. Photo: Supplied.

Pick a number - any number - and see how it applies to your weekend just gone by.

Numbers, when they are grouped together or put side by side usually paint a picture, and my numbers for the first few days of December lined up better than they have for the last few footy seasons, given the current climate of a word called C (a word that I am isolating from my narrative, not just for the purpose of kicking it into touch for this column, but more so for sanity’s sakes).

So, here’s my numbers and how they lined up after I teamed up on the first tee of Tauranga Golf Course with my mate Mike King and his team from the I Am Hope Foundation, who were in town to talk about the topic of mental health and wellbeing for our tamariki.

3. The par of the first hole is four, but the bro shoots a three. Now that’s a birdie in golf speak and after not having hit a ball with the bro for 25 years, when we both danced to a different drummer, he smacks us all in the fairway face with a perfect drive, pitch and putt. Bugger!

2. The number of pieces my driver was left in when his buffed-up boys Tia and Terrence Trent gave it the ‘head high’ hit on the very last hole. Bugger again!

11.11. The magic Buddhist number of the day where the ears of the universe open up according to my brother to another mother, the Dalai Lama. And open up they did at The Adams High Performance Centre, when Mike talked it straight up the guts to a gym full of gentleman who had kindly given their time and their attention to tautoko the kaupapa

It was put together by another amazing, sweet smiling community king pin, Ati Aaifou-Olive, the conductor who brought the beautiful orchestra of talent together on behalf of Bay of Plenty Rugby Union.

300,000. The number of kids that Mike and his team have talked to kanohi ki te kanohi - face to face, since the constipated system full of middlemen blew the whistle on themselves for failing to see the solution to suicide sitting right in front of them.

Or, as Mike said, “knew nothing about how to back the ambulance up to the top of the cliff for our kids to get out of, not into.”

63. The number of players who laced up and locked in to the kaupapa of kindness that Ati, Pat and his team had put together. All Blacks, including their captain Sam Kane, were there as was the coach and some of his Chiefs team on the sideline.

1. The only injury that needed the zambuck’s attention - and to the brother who found his Achilles’ heel and took one for the team, you were the player of the day.

4. Coaches, with a calibre rarely assembled. Sir Gordon Tietjens, Monsieur Vern Cotter, Ta Hika Reid and the no-nonsense Lipi Sinnott gave the game an aura of authority that was worth twice the admission fee of nothing more than two shots in the arm and a kete full of kindness towards our kids.

7. The sponsors, who came together for the kaupapa. Baia Build, Good Buzz, Te Tuinga, Body in Motion, Pacific Islands Community Trust, Local Gecko Productions and Bay of Plenty RFU can always say they were and are the foundation whānau of the first ever Mental Health Exhibition Game of rugby to support the wellbeing of our tamariki.

364. The number of days before the exhibition game for the I Am Hope foundation comes to Tauranga again, and you can bet your pension or your mokopuna’s pocket money that it will be the calendar event of December.

Zero. The amount of money that was talked about or needed over the weekend, because the I Am Hope Mental Health game was all about kaupapa and not cash.

9. The points scored by the number 14 jersey, and I don’t know what is going to be harder to live down -  the birdie on the first or the gumboot conversion after the try he scored on Sir Gordon Tietjens Park, in front of Sir Titch himself.

And lastly but not least …

1. One Love. The community that plays together stays together, and the game the community played with the I Am Hope and Wasps team went a long way to feeding the ball of self believe back into the scrambled scrum our kids’ thinking can be in.

One can be a lonely number, and all I know after living the life of lockdown since the bat and the cat bumped into each other in a Wuhan wet market is one is a number that none of us need to live by, before during and after the C word walks on by.