Why is seagrass washing up on the shores? 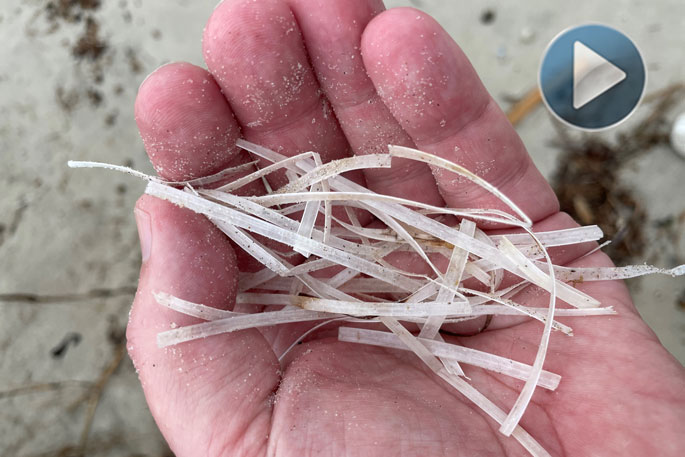 The dead seagrass washing up on shores around the Coromandel can be attributed to changes of water currents and weather. Photo/Supplied.

The mysterious substance that has washed up along Coromandel beaches this week has been identified as dead seagrass.

But the reason why it has suddenly washed up has left residents puzzled.

The seagrass has littered numerous beaches in the Coromandel and has also been seen along the beach in Arataki.

Believing it was plastic, residents in the areas collected rubbish bags full of the substance, and although it has now been identified as a natural substance, locals are wondering why this is happening as many have never seen anything like it before.

Ceridwen says the strands are definitely plant material and are probably Zostera sea grass, also known as eel grass, which is not a seaweed but a true flowering plant.

“Zostera sheds its leaves after winter, usually between October and December in New Zealand, and when there are large seagrass meadows, that can mean a lot of seagrass leaves washing up on shore all of a sudden.

“The green leaves can turn brown or bleach white on the beach. Human activities can also dislodge seagrass, but given the lack of roots on the samples I was sent and the timing, I suspect this mass stranding event is just a natural process.

“Changes in currents and weather can cause changes in what washes up on beaches.

“For example, here in eastern Otago we often get a lot of floating seaweed from the sub-Antarctic washing up on local beaches after strong south-easterly storms – at other times it’s rare as it heads offshore.

“Seagrass habitats are declining globally, and very vulnerable to human activities. Hopefully the wrack on the Coromandel beaches indicates that there are still healthy seagrass meadows nearby.”

Robert says the strands could be attributed to the coastal waters around the North Island of New Zealand currently experiencing a strong "marine heatwave".

“A marine heatwave is an extended period of extremely warm ocean temperatures. Waters offshore of the Coromandel Peninsula have been in a marine heatwave since early November. Temperatures recently peaked at 21°C on December 9, 2021, which is 3°C degrees above average for the time of year.

“Previous strong marine heatwaves occurred around the Coromandel during summer 2017/18, 2013/14 and 1997/1998. However, with sea surface temps peaking at 3°C above normal offshore of the Coromandel, this ongoing marine heatwave around North Island NZ is now the most intense observed for this area in the 40-year satellite record.

“Field observations collected following marine heatwaves that have lasted several weeks elsewhere in the world have detected severe seagrass die-off, including in Western Australia, the Mediterranean and the Baltic Sea.

“An extreme example is a MHW that occurred across the Western Australian coastline in the austral summer of 2010–2011.

“It exposed marine communities to summer seawater temperatures 2–5°C warmer than average over several weeks, which wiped out 1300 square kilometres — an area twice the size of Singapore — of seagrass in the World Heritage-listed Shark Bay.”

“Winds on the Coromandel were predominantly onshore (N / NE) during December, which would favour retention of material near the coast and lead to a stranding.”

Ceridwen says it’s great to see the public checking what is washing up on beaches and collecting anything they are concerned about.

“If we all picked up a bit of plastic when we visited the beach, we could make a big difference to the health of the oceans.

“In this case, the material isn’t plastic, but I’m really happy to see people concerned about protecting beaches and nearshore environments.”