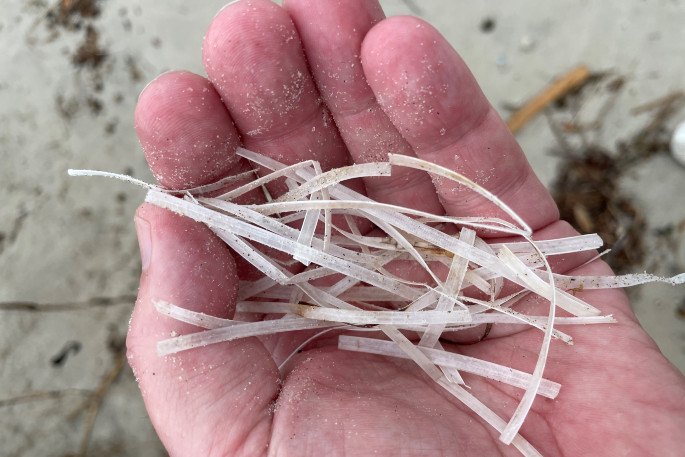 The unusual plastic-like substance that has been washing up on beaches along the Coromandel coast. Photo: Peter Collins.

A mysterious substance that washed up and sparked concern in eastern Coromandel has been identified as dead seagrass, not plastic.

The substance concerned a group of locals on Friday when they spotted bits of it scattered along six different beaches.

Believing it was washed up plastic, a team of 30 people collected six rubbish bags of the fibres along about 100 metres of Matarangi Beach, before later learning it had washed up in other places.

Waikato Regional Council coastal scientists have since solved the mystery of what – but are looking into why.

“Looking at it under the microscope, scientists have been able to confirm it is dead seagrass,” says a Waikato Regional Council spokesperson.

These sites are close to some known subtidal and intertidal beds, she says.

“Seagrass is important for the marine biodiversity and provides lots of benefits to the environment.

“Understanding why it’s been displaced in several locations will be the subject of an investigation by our scientists.”

...The ocean grass is going out in sympathy with what’s happened to the land grass...

More plastic would’ve been disastrous. Good on the locals for stepping up when the Councils kept passing the buck.