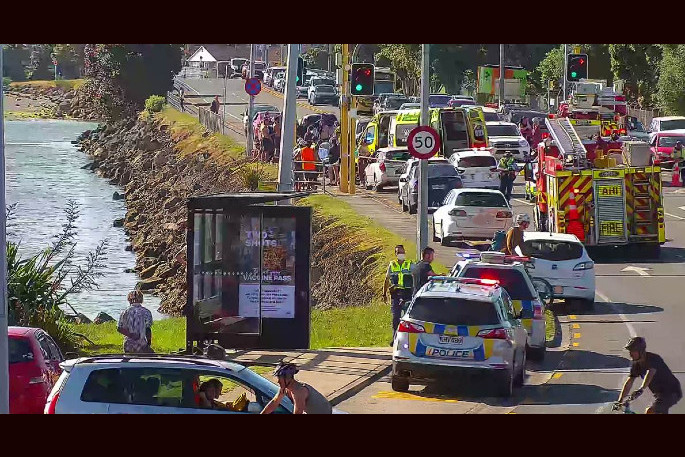 Emergency services at the scene of the crash on Chapel Street. Supplied photo.

Police have now released the name of the woman who died in a crash in Tauranga last week.

She was 65-year-old Maree Annis Geary of Otūmoetai.

"Police extend their condolences to her family and friends at this difficult time," says a police spokesperson.

Emergency services were called to the crash on Chapel Street around 5pm on Wednesday, December 8.

Police say the investigating is in its early stages and initial indications are that three vehicles were involved in the crash.

One of the vehicles involved crashed into Tauranga Harbour.

Maree died after the crash, while three other people were treated for varying injuries.

One person was in a serious condition and another in a moderate condition.

One other person was assessed at treated at the scene.

Police serious crash analysts are still in the early stages of the investigation and the exact cause was yet to be determined, says a police spokesperson.

Officers are working with CCTV operators and members of the public to establish the events leading up to the crash.

"Enquiries into this incident are ongoing."

Firstly, condolences to the bereaved. Close in/out access to the centre off busy Chapel St, enabling in/out access only by Pitt St (off Marsh St), which is a quiet road. Money well spent considering what else is going on in this city!