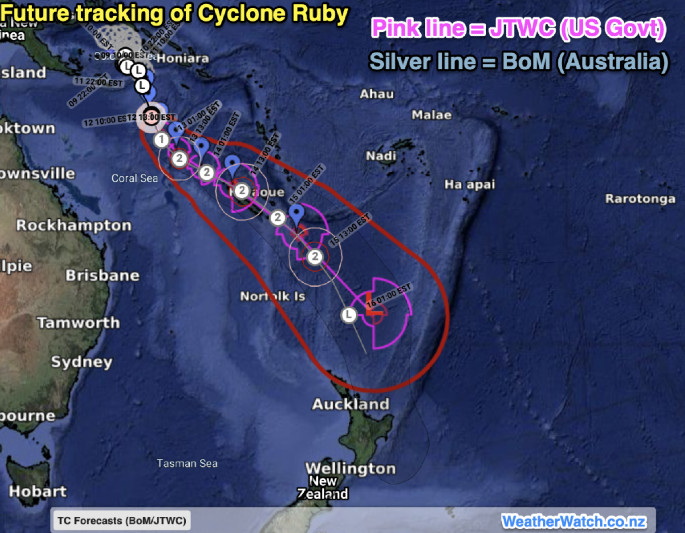 WeatherWatch have advised that the lows forecast this week will complicate the future of a cyclone as it gets closer to New Zealand.

“The storm is going to strengthen into a Category 2 Tropical Cyclone with gusts to 160km per hour and may strengthen further,” says a WeatherWatch spokesperson.

Tropical Cyclone Ruby may also have an impact on New Caledonia and Vanuatu.

“However low pressure zones in the New Zealand and Tasman Sea area will siphon energy from this tropical storm, helping to create an 'atmospheric river' over some parts of New Zealand this week.

“This is when a highway of tropical moisture is funnelled into a narrow area over a period of time, increasing the risks of flooding.”

WeatherWatch has provided more details on their website about how the lows will complicate the future of the cyclone as it gets closer to New Zealand and rain may be more of an issue than wind.

Latest modelling shows the remnants of the cyclone tracking very close to East Cape on Thursday night or Friday.

“However the other low pressure zones in the NZ area already are likely to trigger a burst of wind and heavy rain two days earlier, around Tuesday and Wednesday.”

MetService advise that on Tuesday, a moist north to northeast flow is expected to lie over northern and central New Zealand ahead of a low pressure system approaching from the north.

"On Wednesday, the low should move slowly southeastwards over northern and central areas while deepening, before moving away to the southeast on Thursday," says a MetService spokesperson.

This low is expected to bring significant rain and strong winds to many areas. “On Tuesday and Wednesday, there is moderate confidence of warning amounts of rain about the ranges of eastern Bay of Plenty and Gisborne, Mount Taranaki, northwest Tasman, the Marlborough Sounds including the Richmond and Bryant ranges, and the Kaikoura Coast and Ranges.

“Finally, there is low confidence of severe gale southeasterlies in exposed parts of Buller and northern Westland on Wednesday.”