Humpty Dumpty to get a new lease on life 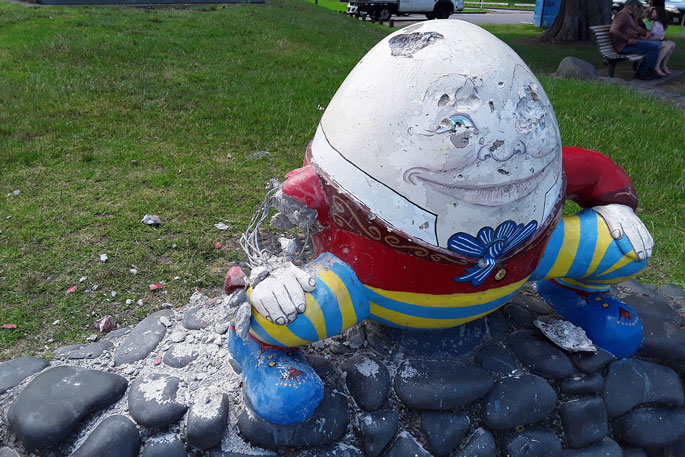 Tauranga’s iconic Humpty Dumpty will stay on the wall, with news the Incubator Creative Hub is offering to take on the restoration project.

A plea was issued by Tauranga City Council for someone to repair the statue at Memorial Park after it was vandalised earlier this week.

Council’s community services general manager Gareth Wallis says it looks like someone took a sledgehammer to it.

“Most of Humpty’s arm has been reduced to dust, and his head is badly chipped in places as well.”

The statue has been at the Tauranga park since 1959.

“Given there’s a good connection between eggs and incubators, we immediately knew we were up for the important responsibility to fix Humpty.”

Council’s spaces and places director Paul Dunphy is thrilled to see the support that the community sent Humpty’s way over the course of yesterday.

“We’re so happy that our Incubator whānau will be helping return Humpty to the community.”
Restoration will take place in the New Year.

Until then, the statue will remain on site, with safety netting in place, as it’s too tricky to move it without risking further damage.