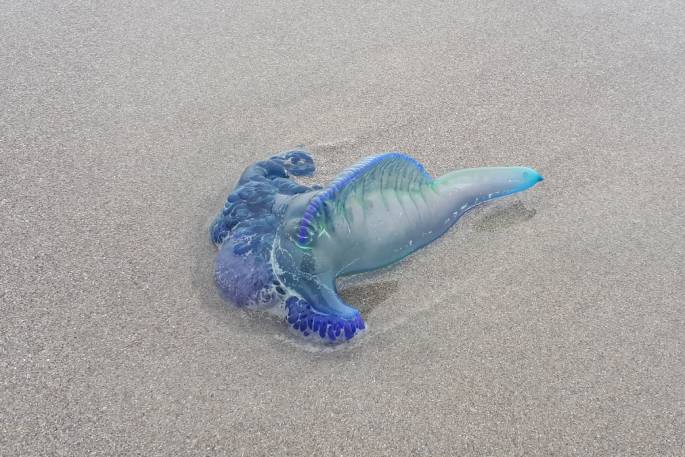 Pale blue in colour, and with a resemblance to what could be described as an extra-terrestrial being, the blue bottle jellyfish is once again invading Bay of Plenty shores.

Warming water temperatures, wind and ocean currents bring the jellyfish to Papamoa and Mount Maunganui beaches during this time of year.

The blue bottle, also known as the Portuguese man o' war is the jellyfish most commonly involved in stings in New Zealand waters and can be a danger to swimmers and dogs.

A Ministry of Health spokesperson says if you or a family member is stung by a jellyfish, get out of the water and flush the stung area with sea water to remove the tentacles.

“If tentacles are still attached use a dry towel to remove them and wear gloves if you have some.

“Immerse the stung area in heated tap water for 15 to 20 minutes. Have it as hot as the person can bear without causing skin burns (and no more than 45° C). A shower can be used for stings to the torso.

“You can repeat the immersion for up to two hours after the injury, but be sure to limit the immersion periods to 15 to 20 minutes at a time with breaks between to allow cooling of the skin. Take pain relief following hot water immersion.

“Do not apply vinegar or methylated spirits as they can make the sting more painful. Vinegar is only effective for Box jellyfish, which are found in Australia.

“The National Poisons Centre is available 24 hours a day on 0800 764 766 for advice on first aid and treatment of stings. 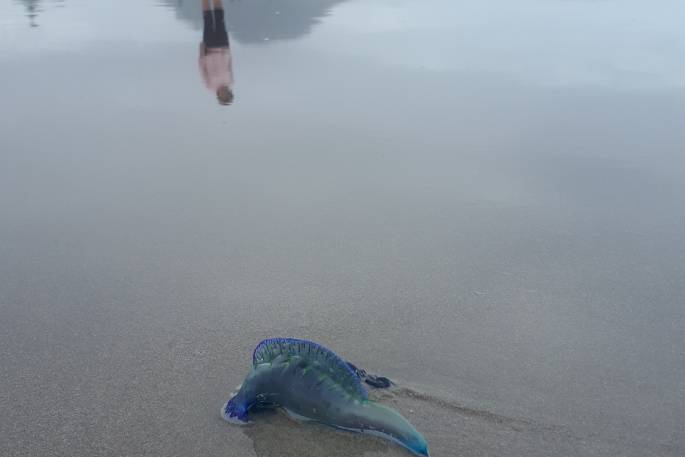 Rosemary Davies’ reflection as she looks on to the blue bottle jelly fish. Photo: Andy Davies.

“Call your doctor if you have been stung and have increasing numbness or difficulty breathing or signs of poisoning which include abdominal pain, muscle cramps, nausea, vomiting

“Signs of infection later can include increasing pain, redness, swelling, red streaks leading away from the sting, heat, discharge of pus, fever or chills, pain that is not controlled by following the self-care instructions, any new or worsening symptoms or a contaminated wound (a tetanus injection may be required).

“Serious allergic reaction or anaphylaxis include swelling around the lips and eyes, rapid development of a rash, shortness of breath or wheezing, chest tightness, severe dizziness or faints, hoarse voice, difficulty swallowing or throat tightness or signs of shock (pale skin, rapid pulse and fainting).

The spokesperson says however, that it is rare for a patient to have an anaphylaxis to jellyfish, even if they are stung on the face or neck.