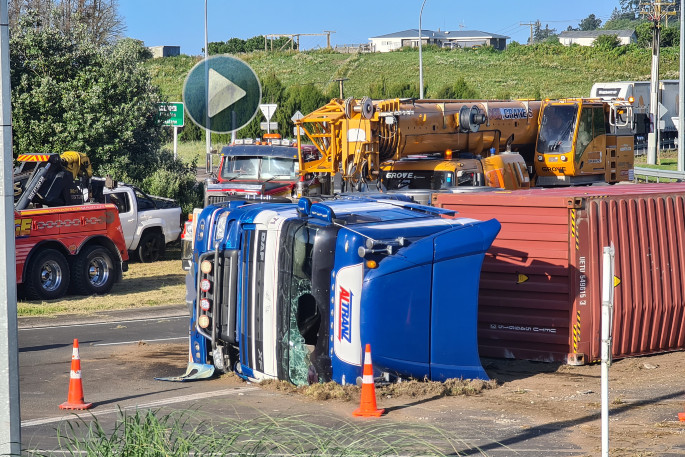 Traffic is building up following a large truck overturning on SH29. Video/Photos: SunLive.

UPDATED 9pm: The truck that overturned at the Tauriko roundabout has been righted and the road is now clear.

Waka Kotahi Transport Agency is advising the incident has been resolved.

Emergency services received a report of a truck and trailer rolling on its side on SH29 at Tauriko at about 5.35pm, says a Police spokesperson.

EARLIER 6.30pm:  A crane has been called to assist with righting a truck that has overturned at Tauriko.

Emergency services received a report of a truck and trailer rolling on its side on SH29 at Tauriko at about 5.35pm, says a Police spokesperson.

Police are controlling traffic at the scene.

"The driver appears to not have sustained injuries in the crash," says the spokesperson. 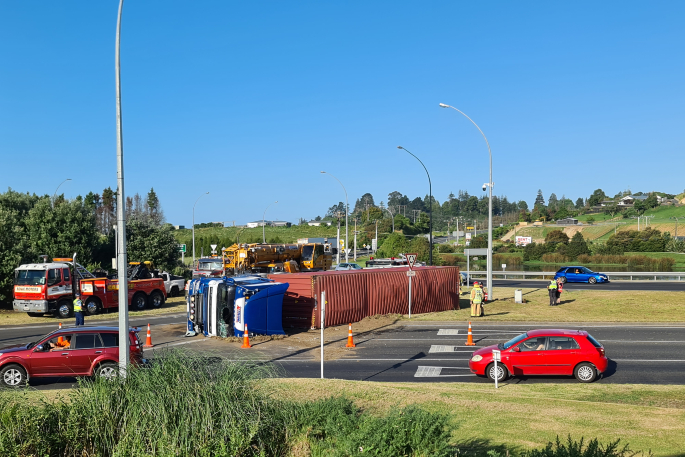 Earlier, 5.50pm  A large truck has rolled at the Tauriko roundabout.

A SunLive reader says that the truck and trailer, which has a container on it, has rolled in the northbound lane of SH29 at the Tauriko roundabout.

"It would have been heading up towards the Kaimais and came around that massive roundabout and rolled on the exit," says the SunLive reader.

"There is fuel pouring out everywhere. The traffic is backing up real quick."

Motorists are advised to follow the directions of emergency services on-site and to expect delays.

Typical Kiwi attitude to blame the road. It doesn’t matter what the angle or camber, a reckless driver will test the limit by going faster.

Stupid is as stupid does.

Come on guys, it’s a brilliant roundabout. Take some responsibility for your load, your speed and your judgement. Any primary school kid can tell you about centrifugal forces and gravity!

With the sheer volume of traffic and inadequate roading, I expect more and more accidents and grid lock. Tauranga should have a motorway bypass years ago... problem is, past planners never had foresight . Current planners want everyone on their bikes, so, city is at a stalemate.

Well designed roundabouts that defy the laws of gravity. All over the place. Best practice designs. Everyone built in the last 10 years is the same. Professional design engineers.

happens too often, speed, going too fast, the centre of gravity all wrong top end heavy, depends how the container was stacked, brains, and common sense, lacking in a lot of truck drivers im afraid.