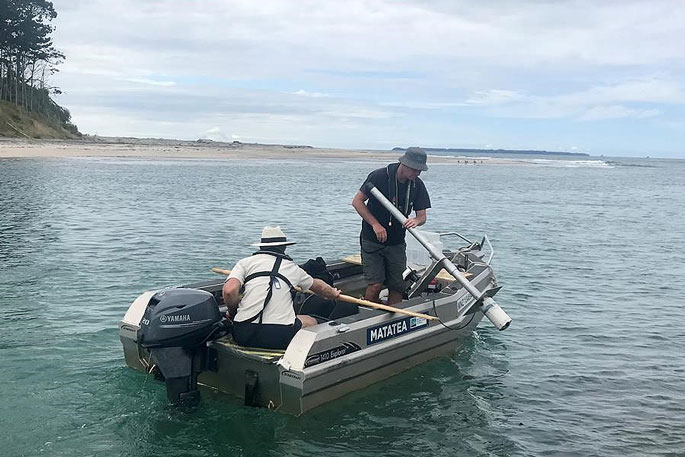 Members of Bay of Plenty Regional Council's Data Service Collection Team deploy sonar technology off the side of their dingy in the Kaituna River last week. Photos: BOPRC.

Bay of Plenty Regional Council staff spent 16 continuous hours punting slowly back and forth across the Kaituna River last week carrying out some critical work.

From dawn until dusk, the Data Service Collection Team used sonar technology mounted on a dingy and a flotation device to measure water flows in the Kaituna River over a full tidal cycle.

“Before the re-diversion which allowed for the wetland creation, we created a 3D computer simulation of what flows might be like in the river following the work.

“Last week’s river gauging work will check how close the computer simulation was in predicting what actually happens, and help us optimise the settings for the wetland and surrounding river habitats to thrive.”

The data team worked in two teams of two.

One team was responsible for slowly crossing the river in the dingy more than 200 times while the sonar technology (an Acoustic Doppler Current Profiler) measured the water velocity and depth, and the other team used a floatation device to hand-pulley another device across the channel in front of the Maketū Estuary Control Gates every five minutes from 5am to 9pm.

Nearly a year on from the completion of the re-diversion project, Te Awa o Ngatoroirangi / Maketū Estuary is already showing signs of healing. 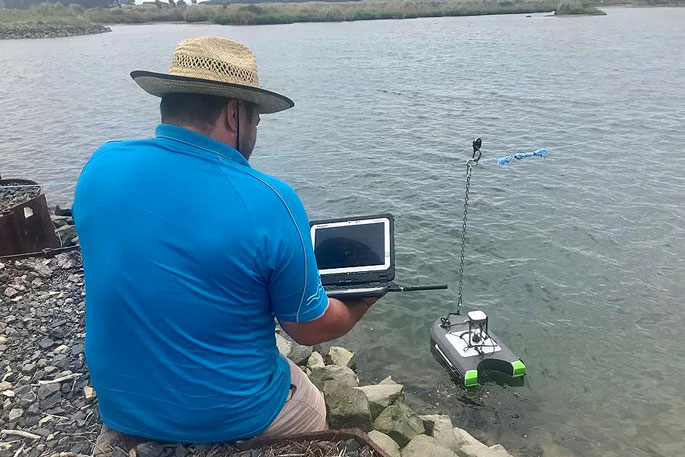 Pipi and shellfish at the Maketū Estuary have been increasing in size since work began in 2018 while problematic algae covering the upper estuary bed has been decreasing.

Seagrass, which provides valuable habitat for fish, is also returning to the estuary.

“These promising signs, particularly in the upper estuary, show that the ecological health of the estuary is improving,” says Pim.

“We hope that future monitoring will continue to show gradual increases in these trends.”