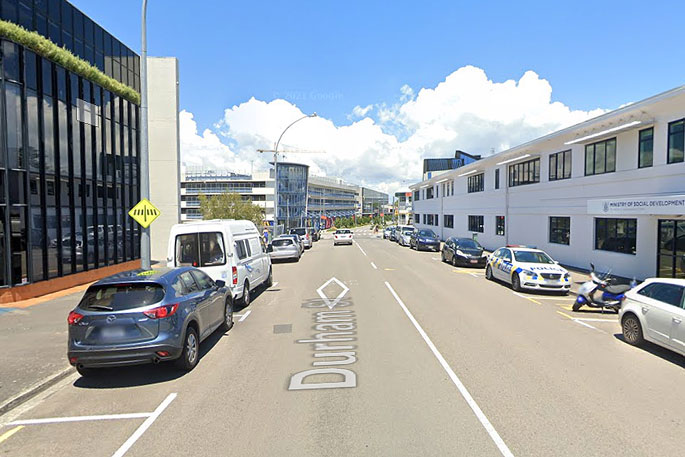 Tauranga’s central bus interchange will be temporarily relocated to Durham Street (between Wharf and Spring Streets) from the end of March next year. Image: Google Maps.

Tauranga’s central city bus interchange will be temporarily relocated to Durham Street from the end of March next year as part of the civic precinct redevelopment.

The move from the existing location on Willow Street to Durham Street (between Wharf and Spring Streets) is needed so the neighbouring Tauranga City Council buildings, which currently house the customer service centre and central library, can be demolished to make way for a new library and community hub building.

The Commission has approved the recommended interim location, emphasising that it is a temporary solution while a new permanent transportation hub is developed.

“Plans to redevelop the civic precinct are well under way so we have no choice but to move the central bus interchange by the end of March,” says Commission Chair Anne Tolley.

“We view this as the best temporary solution for our community, until a bigger and better permanent solution is created.”

Transport Infrastructure outcomes manager Mark Burgess says several sites across the city were assessed for suitability and the Durham Street site came out on top.

“The site on Durham Street was the preferred option due to its proximity to the current site, the open streetscape, and the fact it is removed from high pedestrian traffic areas. It was also supported by the InterCity bus service from an operational perspective."

Safety and accessibility were other key components of the assessment, with the site ranking highly in both areas, says Mark.

“We acknowledge that Bay of Plenty Regional Council has a different position on the choice of site. The Commissioners and elected members of the regional council will continue to work with staff from both councils to address any concerns.”

Mark says there are plans to enhance street lighting in the area, and signage and shelters will also be added.

Changes to road markings and additional pedestrian crossings are also being considered as part of the design.

Preparations at the new location will start in February next year and the temporary interchange is expected to be fully operational by the end of March.

“Decisions on the future location of the permanent transport hub will be informed by other work we’ve got under way, such as the City Centre Strategy Refresh, the Parking Management Plan and City Centre Movement Plan.”

Nic says the Public Transport Strategy being undertaken by Bay of Plenty Regional Council will also feed into the decision.

Good use of tax payers money?

All this so we can have what there already is? Buildings and a library? Wish the money was spent in areas that are needed.

We all know that there are too many empty buses on the road currently. Is the whole of Durham! Street now going to become a bus park...? And just where are the contractors vehicles going to go during construction...? Not forgetting access to sites for mobile cranes, concrete trucks and other heavy machinery. All whilst Cameron Rd is single lane traffic at peak times and workers try to find different routes to avoid the bottlenecks. But, stationary traffic doesn’t cause accidents and we know that is the mantra in the city planning offices.