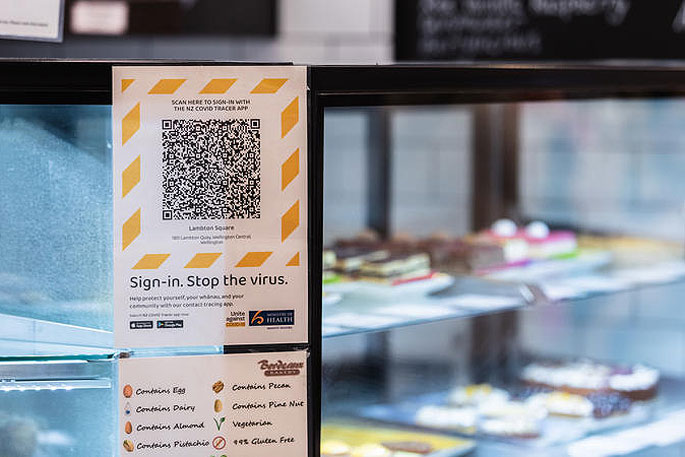 In the Bay of Plenty most of the region has moved to the orange light, but some businesses have chosen to do things differently.

Owner of The Nourished Eatery in Tauranga Sharna McElligote is providing her customers with a takeaway experience under the new framework.

"Everyone has supported us for all these years and I think it's so unfair that we have to turn people away for their personal health decisions."

The Bay of Plenty District Health Board area hit its first 90 per cent milestone at the beginning of last week, but only 82 per cent of the population has received both doses.

McElligote believes she will pick up new customers as a result of her decision.

Around the corner, hairdresser Sydnee Gould welcomes the new system - but hopes there will soon be a way to store clients' data within the app.

"It's kinda annoying to have to ask the client every single appointment 'can I scan your passport?' "

Down the road in Te Puke, owner of Marigold Cafe Justin Bruning is doing the painstaking task of standing outside, checking each potential customer had their pass.

He has been met with some abuse, some who didn't realise the traffic light system was now in place and didn't have their pass, and some loyal customers who have had to say goodbye.

"A few people that have been coming here every day since we've opened have said they can't come back... it is a shame and it's really hard because you want to make money, that's what you're in business for, but we can't afford to run it differently at the moment," says Bruning.

Te Puke is the last big town in the Bay of Plenty in the orange level.

Whakatāne, Ōpotiki and Kawerau districts are all in red.

Te Puke Florist owner Murrary Howell says it has been confusing deciphering the difference between red and orange and what that means for his business.

"Now that it's actually come into place, we're starting to settle and realise where we actually are but it was freaky yesterday [Friday] not knowing.

"People [were] saying one thing and people saying the other thing you know. I was going backwards and forwards and I was just really starting to freak myself out thinking am I doing the right thing?"

Western Bay of Plenty Council has decided to not ask for vaccine passes.

Mayor Garry Webber says it's a pragmatic decision to ensure public services are available to everyone.

"By the very nature of local government we have to keep many of our operations open, if somebody comes in wanting a building consent... register dogs... we've just got to process them because we've got a legal obligation to do those things in a certain number of days."

Webber says pools and libraries will also be open as it's easier to take a blanket approach to all their services.