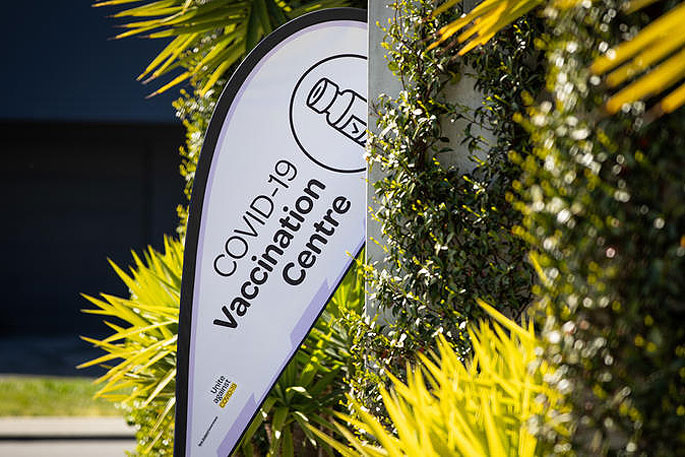 On Saturday a total of 26,957 vaccinations were administered in New Zealand.

There are 106 new community cases of Covid-19 reported across New Zealand on Sunday.

Of these 93 are in Auckland, three in Northland, eight in Waikato, one in Whanganui, and one in Canterbury. There are no new cases to report in the Bay of Plenty or Lakes DHB regions.

There are two new cases identified at the border. Both cases are in managed isolation.

There are 77 people in hospital with 14 cases in hospital in Waitemata, 31 in Auckland, 28 in Counties Manukau, three in Waikato and one in Bay of Plenty.  There are seven people in ICU and the average age of hospitalisations is 48.

Two DHBs, Auckland and Capital and Coast DHBs, have now reached the milestone of 90 per cent of their eligible Māori population having had their first vaccination.

This is closely followed by four other DHBs – Waitemata, MidCentral, Hutt Valley and Wairarapa DHBs, all with eligible Māori population vaccination rates at or above 87 per cent for first vaccinations.

“We continue to close in on the 90 per cent vaccination milestone with 88 per cent of the total eligible population nationwide, aged 12 and over, now fully vaccinated,” says a Ministry of Health spokesperson.

"We’re continuing to ask anyone in New Zealand with symptoms – no matter how mild – to get tested, even if you’re vaccinated. Please remain isolated until you return a negative test result," says a Ministry of Health spokesperson.

"If you are not vaccinated, now is the time, as vaccination is number one defence against COVID-19. Your DHB or local health provider will have plenty of opportunities to make this happen."

Today the Ministry of Health is reporting three new cases in Northland.

Two are close contacts of previously reported cases, based in Kaitaia, and have already been isolating.

The third case is an essential worker, based in Whangarei, who regularly travels to Auckland for work. This person’s result was picked up through routine surveillance testing.

Testing and vaccination sites open in Northland can be found on the Northland DHB website.

Today, there are 93 new cases being reported in Auckland.

Health staff are now supporting 3,628 people to isolate at home, including 857 cases.

Health staff continue to assess the locations of cases on a daily basis to ensure there’s good testing and vaccination centre coverage.

"Today we are reporting eight new cases in Waikato - two in Hamilton, two in Te Kūiti, three in Piopio (near Te Kūiti) and one in Huntly," says a Ministry of Health spokesperson.

Seven of the cases have been linked to previous cases and the eighth case is under investigation.

There are five testing sites operating across the region today in Hamilton, Te Kūiti, Taumarunui and Ōtorohanga.

Health staff are now supporting 107 cases to isolate at home.

Today the Ministry of Health is reporting a new case in Whanganui.

Public health staff are continuing to investigate but it appears the case recently travelled out of the city and is likely to have links to previously reported cases outside the region.

The person became symptomatic on Thursday and was tested on Friday before receiving their result yesterday.

Since the test, the person has been isolating in a dedicated community facility.

As investigations continue, a number of locations of interest have today been identified. Two have already been published today and more are expected this afternoon on the Ministry’s webpage.

Whanganui DHB’s testing site on hospital grounds, is open for an extended period today, until 3pm. You do not need an appointment.

For all the up to date testing and vaccination sites, please visit the Healthpoint website.

There are two new cases to report in Canterbury today and one case reported yesterday which has today been formally added to the NZ case tally.

"Yesterday’s case has been clearly linked to other cases in the Nelson-Tasman area. Canterbury DHB report that as soon as the person in Canterbury learned of their contact the person got a test and had been isolating at home since that time," says a Ministry of Health spokesperson.

"The person’s prompt actions have reduced the chances of further spread and underline the importance of getting a test immediately if you have been to a location of interest, are identified as a contact or possible contact of a case, or if you have any cold or flu-like symptoms."

The latest two cases were notified after the Ministry’s 9am reporting cut off and will be added to the case tally tomorrow.