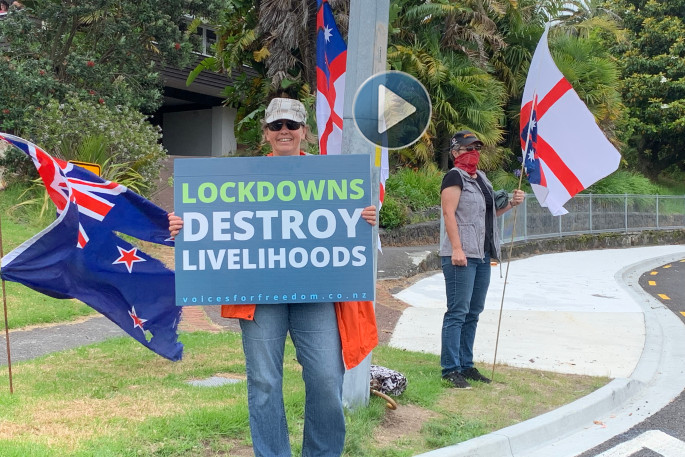 Signs provided by Voices for Freedom were held by protesters lined up along 11th Ave. Photos/Video: SunLive.

From 11.59pm on December 2, New Zealand adopted the Covid-19 Protection Framework, also known as the traffic lights. While this new approach introduces more freedoms for vaccinated New Zealanders, it also means new requirements for those who are not vaccinated.

Protesters, organised by The Freedoms & Rights Coalition of New Zealand, lined up on the footpath and grass verge along 11th Ave outside the Queen Elizabeth Youth Centre, mixed in with traders selling Christmas trees, fresh honey comb and gift packs. 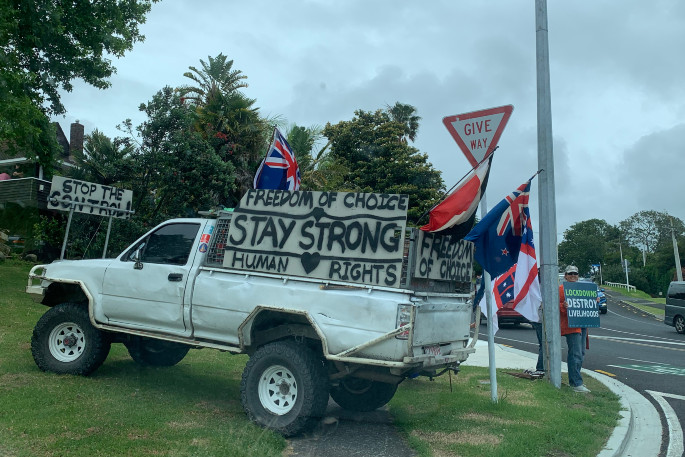 Many signs were provided from Voices for Freedom with messages such as ‘This ends where we say No’, ‘We are Mothers Hear us Roar’, ‘We Call the Shots’, ‘Use Cash Support Local’, ‘This is not our New Zealand,’ ‘First do no harm’, ‘We are Voices for Freedom’, ‘Keep Hugging it’s Healthy’, ‘Scan scan scan scan away your freedom’, ‘Stand up speak out, ‘Follow the Money’, ‘I’m vaxxed and pro freedom of Choice’, ‘Choose freedom over fear’, ‘We stand with teachers’, ‘I am not your experiment’, ‘Questioning vaccine safety doesn’t make you an anti-vaxxer’ and ‘Coercion is not consent’.

Other signs on yellow backgrounds had ‘The Media is the virus’, ‘Main Stream Media suppress the Truth’ and ‘Say no to no jab no job’.

Homemade signs also included a witch riding a broomstick with the words ‘No Jacinda no jabs no lockdowns no masks’.

The event follows on the heels of a previous gathering held at Coronation Park at Mount Maunganui on Super Saturday October 16 where about 450 people attended, and another gathering at Memorial Park on October 30 which attracted thousands of people. 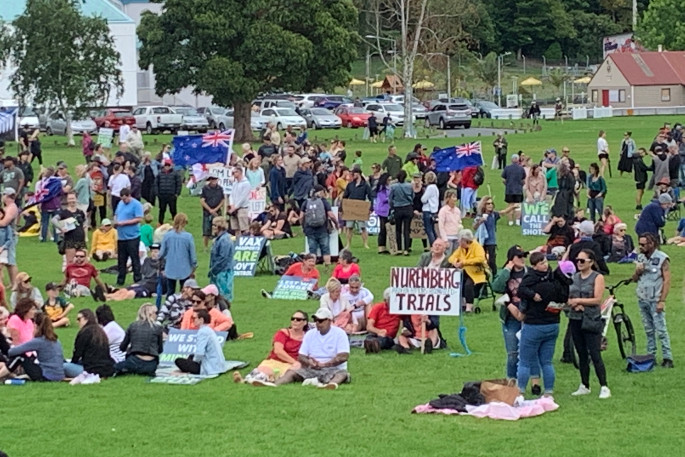 The crowd gathering at Memorial Park.

The atmosphere in the park as people gathered on Saturday December 4 was relaxed and friendly with music playing. Flags were flying including the New Zealand flag, the United Tribes flag and the Tino Rangatiratanga flag.

The National anthem was sung followed by speeches.

“We have had our livelihoods stripped away, had businesses forced to close, had our hearts torn to bits, but our heart still goes out to those affected by these pointless mandates and these apartheid policies,” says one of the organisers. 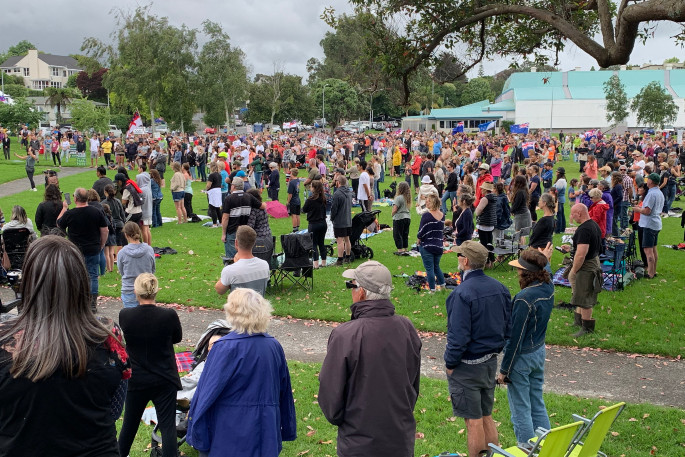 Speakers followed who told first-hand accounts of how they or family members had adverse reactions following having received the Pfizer vaccine. One speaker told how her sister reacted immediately with heart racing, and passed away some days afterwards.

“One of her symptoms was she was constantly cold, she couldn’t warm up, she was sleeping by the fire, she was with my mum, and my mum was looking after her. On the Saturday she asked my mum to give her a bath because she couldn’t warm up, even with sleeping with the electric blanket on. On Saturday night she went to sleep and she never woke up. She passed away in the night. My mum found her the next morning. One of the biggest things I am thankful for is she did go in her sleep.”

The speaker told how her family is waiting on the autopsy report, and have been told there were clots in her sister’s lungs and heart.

“We have had a pathologist review her case and confirm to us that the clots were fresh. They weren’t in her system beforehand, they were a few days old.” 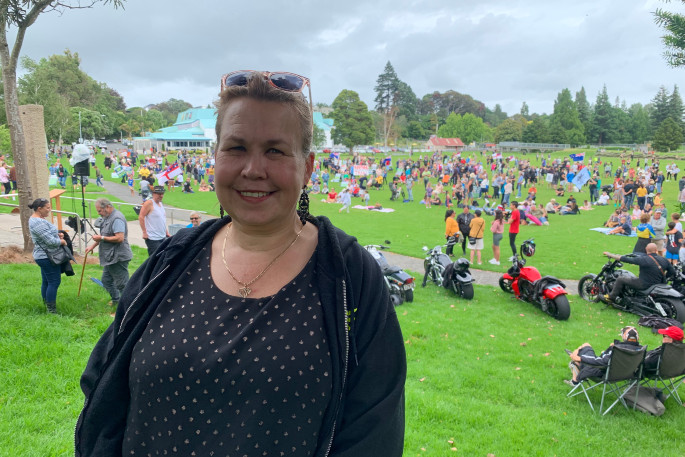 Rozanne de Wild also spoke about her reaction to the vaccine, how she now isn’t allowed to have a second dose, and about her ongoing fight to have an exemption from having the vaccine. Despite meeting the criteria, this last week she has been denied an exemption, and is supporting others who are also experiencing similar.

“I have lost my income, I have had medical bills and suffered so much,” says Rozanne. “This government is not standing up and supporting us.”

The organisers spoke about job losses, mandates, businesses closing and injustice and referenced one of Martin Luther King’s speech.

“You can be discriminated against because of your gender, your race, your religious beliefs. That’s not in question here today. What is in question? Our freedoms, our choices.” 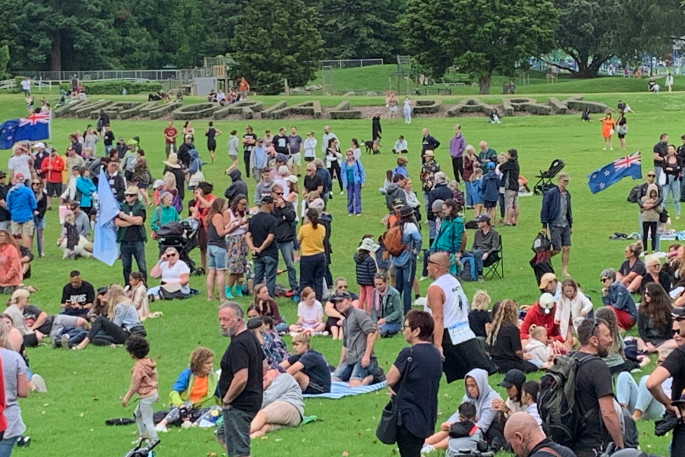 The group left Memorial Park, reassembling on the Tauranga waterfront, where the organisers spoke again to the crowd.

“On December 16 at 12pm we are descending on capitol hill,” says the one of the organisers. “We need to go down there to the steps of Parliament. We need to dispossess this government and the evil apartheid policies it schemes.

Following the speech a group with some wearing ‘Not my Aunty’ tee shirts ended the public gathering with a haka.

From December 15, people travelling out of Auckland will need to be fully vaccinated, or have a negative Covid-19 test administered no more than 72 hours before departure, to leave Auckland and visit other parts of the country. This requirement will remain in place until January 17 2022. 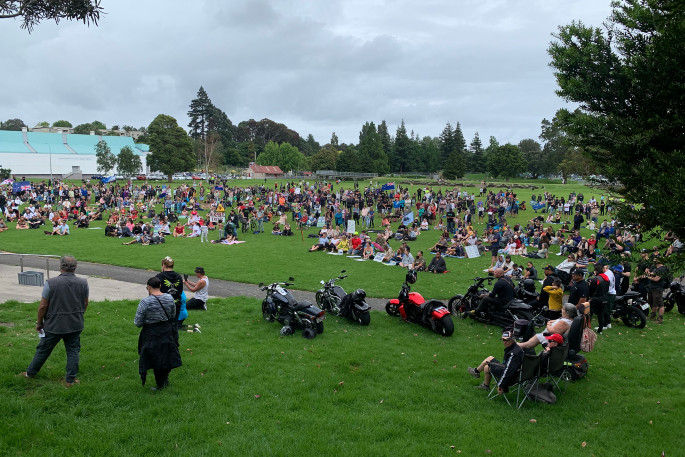 The crowd at Memorial Park.

There are six new cases of Covid-19 reported in the Western Bay of Plenty today. All are contacts of existing cases.  One case is receiving care in Tauranga Hospital.

At the end of the day no-one knows what is the best course of action. No-one knows what the results of our vaccinations will be. I am double vaxxed btw. But it may just be that we are creating a super virus resistant to all treatments. We just do not know at this point.

So much stupidity by so few equals a minority.So much unsubstantiated information and rhetoric also.

What a fantastic question... I would certainly be in favour of billing the recipient of public health services in certain cases. Smokers, illegal drug users, people that don’t wear seatbelts or are otherwise distracted in a vehicle, drink/drugged driving, injured whilst carrying out a criminal activity, all cyclists, skydivers and participants in dangerous sports and in this case, yes, people who decide to forsake science based advice to protect themselves and the wider community.

What a shocker of a statement, so vaccinated can still get covid why are they not given a bill ? Your logic does it apply to smokers ?Around 5000 people die from that each year in NZ. Do we send them the bill as well ?

Send them the bill

If you catch Covid and need Hospital treatment. You should be sent the bill. Stop wasting our doctors, nurses and hospitals time with your childish stance.

My comment to you relates to your reply to Bruja.

Can you please supply some proof of your claims. And @Sunlive, some of my comments you won’t publish, yet you allow this.

Yes vaccines are never perfect and a few get adverse reactions just like any drug or medical procedure. However the protection vaccine gives minimises hospitalisation. Ple Ty of data . Again not perfect but the best we have. Earlier this year, researchers at the University of Melbourne looked at the relative risk of spreading COVID between those who have and have not been vaccinated in social settings. It showed that not only are unvaccinated people more likely to get COVID, they’re also more likely to spread it — 20 times more likely, in fact. I vaccinated to not keep out of hospital for everyone who needs life saving treatment from all conditions, heart, cancer, accidents, etc to save lives

Thanks Sunlive for media coverage in support of all New Zealanders who have lost their lives or recieved davasting injuries from the MRNA vaccines.

do you realize you can still get covid and pass it to others even after you are vaccinated. !!!!!!!!!!

International law has, for centuries, been passed to protect and support the health and safety of the majority. There has always been a minority that have been upset and disadvantaged by rules to protect the majority of the population. You’re well within your rights to disagree, but for centuries there has been a price to pay for ignoring public safety orders. Certainly, this government is disgraceful but this form of demonstration only shows you to be irresponsible, ignorant, selfish and easily ridiculed rather than listened to.

You do realise that libraries are often frequented by persons under 15, right. They also have a RIGHT to not be exposed to drongos during a global pandemic. And we (all eligable for vaccination) have a RESPONSIBILITY to not be drongos.

That wish to be vaccinated by Covid 19, please do it alone and don’t bring it to my doorstep. Thank you.

Under ’Orange’....YOU are a Public facility. This requires only masking, distancing and signing in. WE have the RIGHT to access OUR Library! How dare you think you can just ’exclude’ us! There is NO requirement for ANY member to be vaccinated. Also, as you are ’seemingly, unilaterally, deciding’ on NON-mandatory ’rules’, let’s CITE PROOF that every library staff member is double-vaccinated. I mean PROOF! I know that that also is not ’mandatory’ but hey, YOU are ’making the rules’. Let’s have it both ways eh? Proof please that ALL Library staff are double-vaccinated and have Vaccination Passes.

You have a so-called right to protest in this PC crap ridden world but HOW DARE YOU use our soldiers memorial to make your pathetic stand. What an absolute insult. I’d suggest as a bunch of bloody eggs you could hold your protest at the humpty dumpty wall instead.

You have a so-called right to protest in this PC crap ridden world but HOW DARE YOU use our soldiers memorial to make your pathetic stand. What an absolute insult. I’d suggest as a bunch of bloody eggs you could hold your protest at the humpty dumpty wall instead.

Imported outrage. Loudly yelling how they are being silenced. Grow up and get vaccinated.

Only care about themselves

The title says it all. The 4% of kiwis that don’t care about others.

I just don’t understand the mentality of some people. Obviously reading the international press doesn’t rate highly for some. It astounds me that they’re willing to give away their hard fought for livelihoods and professions, and in some cases their businesses, to make a point about how clever they think they are. Your choice and I don’t deny you your rights... I sincerely hope that you don’t remain unemployable for too long

These stupid idiots will be first in the queue at the hospital when they catch covid.