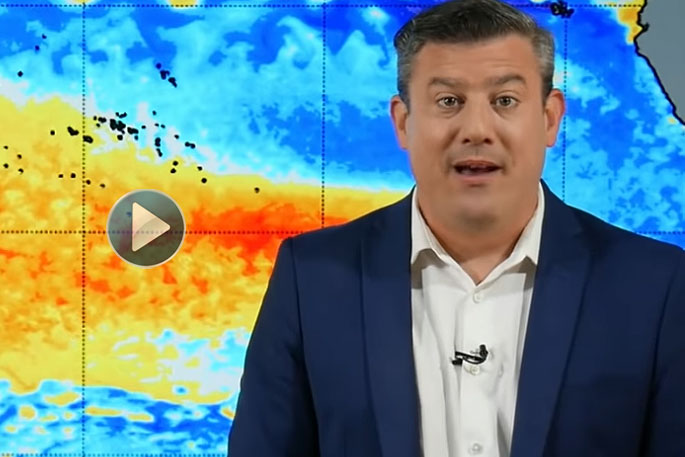 With summer now here, WeatherWatch.co.nz takes a close look at the weather and climate trends for NZ across December, January and February now that La Nina is with us.

La Nina means north of NZ (in the tropics) there is an increased risk of low pressure zones and rainmakers.

La Nina also means sea surface temperatures are above normal, not only north of NZ but also around NZ itself, with the North Island in particular experiencing a marine heatwave.

Higher sea temperatures may also increase the chances of sharks this summer in some coastal areas, says WeatherWatch.co.nz

"Get used to warm nights in the north and east too - the warmer sea surface temperatures (along with extra cloud cover) will help regulate places like Auckland and Wellington, bringing mild nights this summer.

"As for rain - yes we do see the classic La Nina set up with added rainfall chances in northern and northeastern regions, however the Southern Ocean (the normal Roaring Forties belt of weather) remains active and will likely dominate NZ's weather, despite La Nina influencing us too.

"This means more variety in our weather pattern overall and so localised dry areas may well still take over, but extra humidity increases the chance of those hit and miss afternoon downpours."

The North Island may have quite a few showers this summer, says the weather organisation.

"Often in a La Nina summer the days can start off drizzly/light showers in eastern coastal areas, sea breezes then push that moisture inland where daytime heating gathers it all up into large towering afternoon cloud build ups.

"These downpours can deliver a lot of rain - but it's quite localised. Long-range rainfall maps often show these downpours as one big 'blob' of rain, when in theory they are many downpours/showers within that region over the coming weeks (so not everyone gets the rain they may hope for).

"You may notice this is demonstrated in the two week rainfall maps."

DECEMBER - Tracking the Highs and Lows: