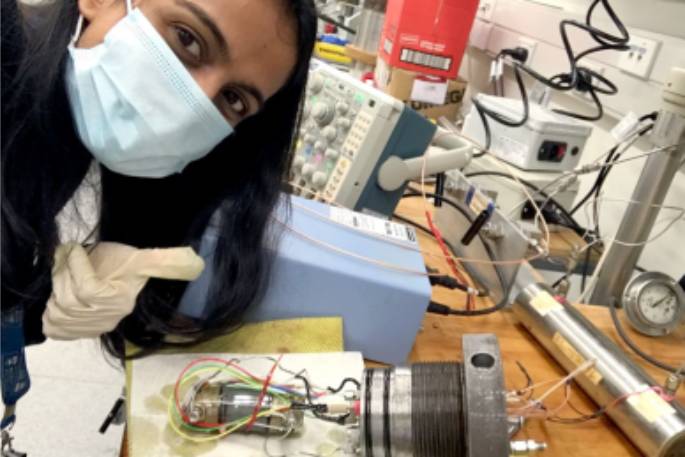 Analysing rocks ejected from Whakaari/White Island has provided a better understanding of the hydrothermal changes of the rocks inside a volcano and the impact those changes could have on the behaviour of a volcano.

Geoscientist Shreya Kanakiya, from the University of Auckland's School of Environment, and co-authors recently had their EQC-funded research published by the American Geophysical Union.

The research identifies a complex change that happens to the chemical and physical properties of rocks, such as dissolving and forming new minerals, which can have an effect on the flow of volcanic fluids through them.

They find that these changes occur differently in lavas and tuffs - porous rock - deep within a volcano’s interior.

If hot fluids can easily circulate within the volcano, pressures below the surface are mostly released at fumaroles, openings in the earth’s surface that emit steam and volcanic gases.

The research however shows that hydrothermal alteration of porous rocks, alongside the immense pressure rocks undergo inside a volcano, can cause pathways to become reduced.

If that flow gets blocked, fluid pressures can build up and potentially be released in explosive eruptions.

Shreya and her fellow researchers also studied how the properties of these rocks change because of this alteration process, which could have an impact on the strength of a volcano and can be used to constrain geophysical data used to monitor the volcano.

“The ability to help decrease this complexity by measuring different rock properties in the laboratory is something that inspires me.”

“This research gives new insight into how a volcano might build up to an eruption and provides extremely useful data for building a picture of how New Zealand volcanoes behave,” she says.

Shreya says that for her research, large sections of altered volcanic rocks were collected from the crater floor of Whakaari in 2018, which had ejected from inside the volcano during a previous eruption.

“The research is motivated towards solving problems with a data-driven approach and assist in transforming geophysical images into rock physical properties to help scientists understand a volcano's plumbing system,” she explains.

“Understanding how hydrothermal alteration affects rocks in a volcano’s interior will aid geoscience researchers and hazard modellers with monitoring and understanding mechanisms for pressure build-up, and hopefully help to reduce risks and injuries.”