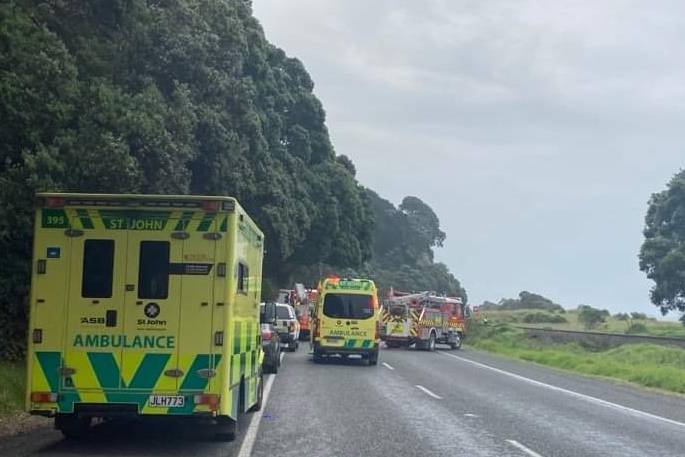 Emergency services at the scene of the fatal crash. Supplied photo.

A man is dead following a head-on collision with a truck in which his vehicle caught fire.

Emergency services were called to the Matata straights at 11.51am on Monday.

The Beacon understands a car collided head-on with a truck on State Highway 2 between Pikowai Road and the entry to the Pikowai Campground.

Chris could not confirm the man’s age due to his injuries.

Forensics will be used to identify the deceased as soon as possible.

Matata volunteer fire brigade chief fire officer Gavin Dennis says his crew were called to the scene and on arrival called for back-up from the Edgecumbe Brigade.

Gavin says when they approached the crash site it appeared to be a straightforward head-on collision, but on closer inspection the vehicle was on fire and the fire had started to travel into nearby brush.

It took fire crews around an hour and a half to put out the blaze.

Gavin says when the fire was extinguished, the brigade assisted police and the serious crash unit in securing the scene.

The impact of the crash caused the truck to land on its side, blocking both lanes of the highway.

The road was closed for several hours and re-opened around 8.30pm.

The truck driver was unharmed and assisting police with their enquiries.